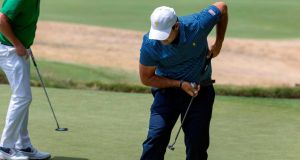 Patrick Reed played up to his role as pantomime villain at the Presidents Cup on Friday when he made a shovelling gesture during his foursomes match in a defiant reference to his controversial bunker penalty in the Bahamas last week.

The American, who was given a two-shot penalty for improving his lie at the Hero World Challenge, has been regularly heckled at Melbourne. At the first hole on Thursday, a spectator yelled out: “Your caddie carrying 14 clubs and a shovel?”

Although mostly unfazed by the attention, the 29-year-old Texan could not help himself after draining a birdie at the 11th hole during a 3&2 defeat to the Internationals pairing of Marc Leishman and Abraham Ancer.

Having halved the hole, he cupped his hand to his ear and “shovelled” twice with his putter as he walked off the green to jeers from the crowd.

The US pair then lost two of the next three holes on the way to their second successive defeat as a pairing.

The shovel gesture raised memories of Reed’s infamous ‘shush’ during the 2014 Ryder Cup, when he raised a finger to his lips at the vocal Scottish crowd at Gleneagles.

On Friday, he was greeted by boos from the crowd for a second successive day when called to the first tee.

Reed and Simpson lost their opening fourball match 1-up to Japan’s Hideki Matsuyama and CT Pan of Taiwan.