The sporting decade that was: The Miracle of Medinah 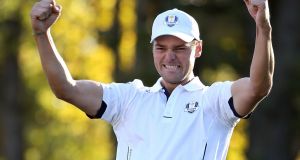 The drama started before a ball was hit in Sunday’s final day of singles play in the 39th edition of the Ryder Cup in the suburbs of Chicago: Rory McIlroy was relaxing in his room, channel hopping, and unaware that his tee-time with American Keegan Bradley was fast-approaching. He’d got his time zones mixed up, and it was only with the aid of a siren-blaring, lights’ flashing police car that the Northern Irishman managed to make his tee-time in the nick of time.

McIlroy got to Medinah Country Club with just 10 minutes to spare, as Europe - trailing 6-10 after the first two days of foursomes and fourballs - headed into the singles requiring a miracle. To win, Jose Maria Olazabal’s team needed to claim eight and a half points from 12 matches if they were to pull off the greatest comeback in the history of the Ryder Cup.

To virtually everyone, it seemed an impossible mission.

As Olazabal, the captain, and Paul McGinley, one of his vice-captains, left the team room that morning, the Irishman spoke to the Spaniard. “If Seve is in heaven and he’s sitting with the best Hollywood scriptwriter, and he was asked which way do you want Ollie to win, it would be for you to be battered for two days, then kept within touching distance by a character like (Ian) Poulter (on Saturday), and then you come strong and win in the last singles. Maybe that’s what our script is.”

Sometimes, fact is stranger and than fiction and, on one of those Sundays where the USA’s supposed victory march lost all rhythm and they stumbled to their fate, Europe produced the most remarkable of final day comebacks. Luke Donald led from the front with a 2&1 win over Bubba Watson, holing out with a bunker shot to seal the deal. 7-10. Paul Lawrie battered Brent Snedeker 5 &3. 8-10. McIlroy beat Bradley 2&1. 9-10. Poulter beat Webb Simpson on the 18th. 10-10.

The USA’s capitulation was complete when Martin Kaymer ignored a footprint on his putting line to hole out on the 18th for a one hole win over Steve Stricker. 14-13 and the cup would remain in European hands. Francesco Molinari added the icing on the cake with a halved match with Tiger Woods to finish. 14½ -13½.