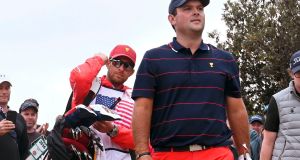 Patrick Reed’s caddie Kessler Karain will not take the bag for the singles matches at the Presidents Cup after an incident with a fan. Photo: William West/AFP via Getty Images

United States captain Tiger Woods has asked fans to be “respectful” of his team at the Presidents Cup after Patrick Reed’s caddie was stood down from the event following a clash with a spectator at Royal Melbourne on Saturday.

Reed’s caddie Kessler Karain, who is also the golfer’s brother-in-law, had a heated altercation with a fan after Reed and Webb Simpson were thrashed 5&3 by the Internationals in the morning fourballs.

The PGA Tour later issued a statement saying Karain would not carry Reed’s bag on Sunday when the American meets Taiwan’s C.T. Pan in the third singles match.

Reed has been heckled by fans throughout the event following his controversial penalty in the Bahamas last week where he was penalised two strokes for improving his lie in a waste bunker.

Woods said some fans had drunk too much alcohol at the event and had taken things too far.

“There’s obviously some yelling. There’s people who have had a lot to drink and have gone over the top,” he told reporters.

“Bipartisanship is part of playing in team matches, whether you’re home or on the road; it’s part of the deal.

“We are all focused on winning the Presidents Cup tomorrow,” he added.

Karain confronted the fan as he and Reed were driving a golf cart following the morning match.

A video posted on Twitter showed Karain gesturing angrily near a temporary seating terrace at the course before turning to board the cart and drive off with Reed.

Golf podcast Fore Play posted a statement from Karain on social media saying a fan had shouted an expletive at Reed from “about three feet away”.

“I got off the cart and shoved him, said a couple things, probably a few expletives,” the statement said.

“Security came and I got back in cart and left ... the most harm done was a little spilled beer, which I’m happy to reimburse him for.”

Before Reed arrived in Melbourne, players on the Ernie Els-captained International team urged local crowds to give him a hard time, with Australian golfer Cameron Smith accusing the American of “cheating the rules”.

In a pre-tournament media conference, Reed denied cheating and said he had inadvertently breached the rule.

Some spectators have brought miniature shovels to the course and waved them at Reed. Others have worn shirts branding him “The Excavator”.

Reed responded to the heckling on Friday by making a shovelling gesture with his putter after holing a birdie putt.

Paired up with Simpson, he lost in Thursday’s fourballs and the foursomes on day two, and was well beaten on Saturday morning by East Asian aces Hideki Matsuyama and Pan.

The American duo were dropped for the afternoon foursomes.

Reed, a captain’s pick, has now failed to score a point in five successive matches when partnered up at team events, having been beaten twice with Woods at last year’s Ryder Cup in France.