Woods and McIlroy in search of form ahead of BMW Championship

Woods has played little since PGA return, while McIlroy is failing to find intensity 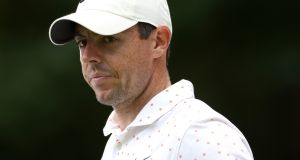 Rory McIlroy has struggled since the tour’s resumption. Photograph: Getty

Tiger Woods and Rory McIlroy have become quite the buddies, they can’t get enough of each other. Having played the final two rounds together of the Northern Trust last weekend, the pair got back on the golf course – this time at Olympia Fields, outside Chicago – for a practice round Wednesday ahead of the BMW Championship, the second of the megabucks FedEx Cup playoffs series.

And while McIlroy – who had returned home to Florida from Boston for a quick two-day break before flying up to Illinois – cancelled his pre-tournament media conference, Woods, with work to do if he is to break into the top 30 on the points list who progress to next week’s Tour Championship, got his media duties out of the way before heading out with McIlroy for a reconnaissance mission on the course.

Woods, currently 57th on the FedEx standings, has played only sparingly since the PGA Tour’s resumption. In fact, he has played only three times – tied-40th at the Memorial, tied-37th at the US PGA and tied-58th at the Northern Trust – and needs a dramatic turnaround in form to make it to the East Lake: “I have to earn my way. I haven’t done so yet, and need a big week in order to advance. If I don’t, then I go home.”

On his first look of the course set-up, Woods compared it more to that resembling a Major set-up than a regular tour event. “This is the playoffs, it is supposed to be hard . . . pars will be at a premium; [it’s about] putting the ball in the fairway and trying to keep the ball in the correct spots,” said Woods, a five-time winner of the BMW Championship but none of which came at the historic Olympia Fields course.

Woods last played competitively on the layout at the 2003 US Open, when Jim Furyk claimed his only Major title when getting to the safety of the clubhouse, and posting a score, before high winds whipped up.

“I probably remember maybe a couple shots from that [US] Open. I went on YouTube and took a look at the golf course and the tournament set-up but it looks completely different. There are a lot more trees, the tees have been pushed back 50 yards, 60 yards on some of the holes. It was a very different type of layout. Guys were hitting a lot of irons off the tees and putting the ball in play. It’s going to be a little bit that way this week but we’re further back,” he said.

If Woods is to get into the top-30 and progress to the Tour Championship, he will likely need a top-four finish, albeit depending on how others fare too.

Of the obvious signs of rust apparent since his return, Woods conceded he had been slow to start playing again until he was sure the PGA Tour’s protocols on Covid-19 were working.

“One of the reasons why I delayed, and [did] not come back and played earlier is we just didn’t know how the protocols were going to be and was our sport going to be safe to come out here or were we all going to get sick? So, I’ve just played enough tournaments to try and have an understanding and feel for what’s going on. Hopefully I can get it going this week and get myself into the Tour Championship next week,” said Woods.

For McIlroy – who arrived into Chicago late and had just that one practice round in Woods’s company – there is the guarantee that he has already made it through to the Tour Championship. But the 31-year-old Northern Irishman, who has dropped to fourth in the latest world rankings, has struggled since the tour’s resumption and conceded he has failed to find the intensity necessary to contend without having crowds at tournaments. Maybe a new venue, for him, will bring a renewed focus?