It will be taking place behind closed doors and with a reduced purse of €1.25 million 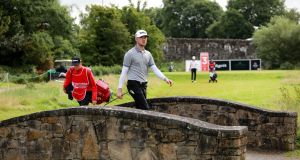 The Irish Open will be held in Galgorm Castle next month. File photograph: Inpho

Who’s in? The guessing game will go on for a number of weeks until the entries are finalised, but it would seem that the downgrading of the Dubai Duty Free Irish Open from a Rolex Series event, from one with a €6 million purse down to €1.25 million, to a regular event on the PGA European Tour could likely affect the quality of the field for the tournament in its revised date of September 24th-27th at Galgorm Castle in Ballymena, Co Antrim.

Its positioning in the week immediately following the US Open at Winged Foot in New York, where some 40 European Tour card carrying players will be competing, could yet impact although Graeme McDowell and Shane Lowry will definitely be among those making the transatlantic trip. Rory McIlroy is not anticipated to play, as his intention is to focus his golf stateside for the rest of the year.

Jon Rahm, who won at Lahinch last year, must also be rated as a doubtful starter given the tournament’s reduced status. However, it is expected that the likes of Lee Westwood and Tommy Fleetwood will be among the field.

The fact that the Irish Open has been salvaged and will be played at all is a huge positive, given the impact of the coronavirus on the playing schedule.

Originally due to be played at Mount Juliet back in May, before it was postponed as the pandemic impacted on world sport, the government’s inbound travelling restrictions limited the prospects of it being staged at the Jack Nicklaus-designed course and, so, a rescue act of sorts in bringing it to the North, where different restrictions are in place, resulted in Galgorm Castle stepping into the breach. The adjacency of the five-star hotel proved helpful in facilitating the “bubble” environment for players on tour.

It is anticipated that the tournament will return to Mount Juliet in 2021.

The tournament has been a part of the megabucks Rolex Series since its launch in 2017 but, on this occasion, will not feature in that elite cluster. The Scottish Open, which takes place at The Renaissance in North Berwick two weeks after the Irish Open, and the BMW PGA at Wentworth are expected to remain as Rolex events.

Keith Pelley, the chief executive of the European Tour, described the Irish Open as “an integral part” of the tour’s schedule. “Despite the obvious challenges of staging any event in current circumstances, we felt it was important to continue with the tournament providing we do could so safely.”

As such, the tournament – like those on the so-called “UK Swing” of event which rebooted the European Tour following a four month shutdown and also similar to protocols taking place on the PGA Tour – will be played behind-closed-doors with no spectators, while players, caddies and others on site will be obliged to follow the tour’s health and safety measures including testing and temperature readings.

Colm McLoughlin, the executive vice chairman and CEO of Dubai Duty Free, who remain committed as title sponsors, welcomed the confirmation. “We have been working closely with the European Tour over the past several months to find a way of staging (the tournamernt) . . . . without a doubt, the tournament will be different this year but we think the players and fans are going to enjoy this return to world-class golf on the island of Ireland.”

Galgorm Castle is a proven championship venue, having previously hosted the Northern Ireland Open on the Challenge Tour – which will again be played in the first week of September, three weeks before the Irish Open – and also staged last year’s ISPS Handa World Invitational, an innovative event which saw men and women play in separate events on the same course set-up.