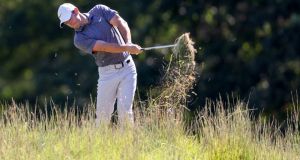 Rory McIlroy in rough on the 17th hole during his first round of the Northern Trust at the TPC Boston course, Massachusetts. Photograph: Rob Carr/Getty Images

Rory McIlroy took a step forward into usually lucrative terrain for the start of the FedEx Cup playoff series only to discover a rocky pathway: the Northern Irishman, who has thrived in the PGA Tour’s end-of-season money fest, opened the Northern Trust championship with a two-under-par 69 that left him five shots shy of the first round leaders. Harrison English, opened with a superb 64, to sit tied with Kevin Streelman, Cameron Davis and Russell Henley.

Ireland’s Shane Lowry is one over par after hitting three bogeys and as many birdies on his first seven holes, before dropping two more shots on the back nine followed immediately by a birdie on the 15th. Graeme McDowell is six over par, a double bogey on the 12th hole the low point on a day to forget for the former US Open champion.

Indeed, McIlroy – who has yet to manage a top-10 since the PGA Tour’s resumption – got off to a poor start with bogeys on the 12th and 13th holes, having started on the 10th, with a poor approach shot on the 12th and then a poor drive on the 13th to be put on the back foot from the off.

However, McIlroy, a two-time tour winner on the TPC Boston course, fought back to roll in an eight-footer for birdie on the 15th, then a 10-footer on the Par 3 16th and just missed an eagle opportunity on the 18th, eventually tapping in for a birdie. The world number three then added a further birdie on the second and bounced back from a bogey on the third, where he was bunkered off the tee, with a birdie on the fifth.

“I keep saying it feels like it has been such a slow year. My game feels similar, maybe not as good as last year. It has been a bit of a struggle. It is nearly there, it is a 69 that could have been a 66.[My game] is still a bit in neutral. If I can got a good round, I can be off and running. But there is a sense of urgency,” conceded McIlroy of his desire to get shooting low again.

McIlroy has confirmed he will not play in next month’s DDF Irish Open at Galgorm Castle near Ballymena in Co Antrim, saying he will be remaining in the US for the rest of the season, especially with the current situation regarding Covid-19, rather than returning for any events on the European Tour.

English, who started the season with conditional status, has managed to resurrect his season to the point where he has made it into the playoffs and a strong first round put him into contention for potentially the biggest win of his career.

“It’s been a lot of work, but I feel like I’m ready to jump up and have a chance at winning some tournaments,” said English of how he had turned his season around.

Yet he would not have to look too far behind him to see the menacing presence of Tiger Woods, who recovered from a lacklustre start – turning in level par – only to ignite on his homeward run with four birdies in six holes to eventually sign for a three-under-par 68.

Reverting back to his “Old Faithful” putter for this latest examination at TPC Boston, Woods said: “I had a good feel [on the greens]. I had a nice pace and I like the speed of these greens. They’re fast. Even though they are soft they’re still quick . . . I just felt comfortable. That’s one of the weird things about golf, it’s just the way it is sometimes.”

Woods began the tournament ranked 49th in the FedEx Cup rankings, with the top 70 players following the Northern Trust advancing to the BMW Championship at Olympic Fields outside Chicago next week. Only the top 30 players then advance from Chicago to the Tour Championship in Atlanta in a fortnight’s time.

There are seven players just one shot off the first round leaders; South African Louis Oosthuizen and Americans Bubba Watson, Scott Piercy and Charley Hoffman among them. Englishman Ian Poulter shot an opening round 66 to also get into the mix, FedExCup winner Jordan Spieth and world number one Jon Rahm are among a pack of players five shots off the lead after they each carded rounds of 69.

Poulter, who has never made it to the Tour Championship in Atlanta, said: “I really haven’t done any good in the playoffs before, never made it to East Lake. It’s a myth apparently to me. Apparently it’s a nice course, but what would I know? I’ve never been there.

“I think what’s important to me is that I just go out and enjoy my golf and play well. If I play well and move up, that’s great; and if not I really don’t care. I’m going home to my family. Whatever happens this week is a win-win.”

Collated first round scores and totals in the USPGA Tour’s The Northern Trust (USA unless stated, par 71):