All you need to know ahead of second FedEx Cup playoff, and latest European Tour event 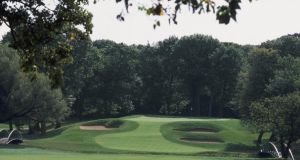 The course: The North Course at Olympia Fields Country Club - 7,366 yards Par 70 - outside Chicago was designed by Willie Park Jnr and the layout remains faithful to the two-time British Open’s original plans. Course superintendent Warren Bidwell was responsible for relocating 45 bunkers and adding new tees prior to the 1961 US PGA while Mark Mungeam supervised changes ahead of the 2003 US Open (won by Jim Furyk). The signature hole is the tough Par 4 14th.

The field: Two players from the world’s top-10 are missing: Brooks Koepka (injured) has been joined on the absentee list by Webb Simpson, who has cited the need for a “rest” after a hectic recent schedule since the tour’s resumption including a run of four successive weeks. Dustin Johnson, who has returned to world number one, will be looking for back-to-back wins in the FedEx Cup playoffs after his runaway victory in the Northern Trust.

Irish in the field: Only one. Although he has failed to find his spark since the PGA Tour’s resumption, Rory McIlroy lies 12th in the FedEx Cup standings and is guaranteed to move onwards to the Tour Championship in Atlanta next week. McIlroy tees off at 6.58pm (Irish time) in a group alongside Xander Schauffele and Brendon Todd.

Betting: No question that the in-form Dustin Johnson deserves his position as 7/1 market leader and the course would seem tailormade for his big-hitting game. Some each-way value might be found with the 66/1 to be found on Cameron Champ.

On TV: Live coverage on Sky Sports Golf from 8pm (featured groups coverage on the red button from 3.10pm).

The course: The Brabazon Course - which played host to the Ryder Cup on four occasions from 1985 to 2002 - is a proven championship venue, having also staged numerous tournaments (including the Benson and Hedges International, British Masters and English Open) on the European Tour through the years. The drivable Par 4 10th hole is a risk-reward teaser that is seen as the signature hole on the course.

The field: The final leg of the UK Swing includes a couple of Major champions in Danny Willett and Martin Kaymer while former world number one Lee Westwood, who last won at the Abu Dhabi championship in January, is also playing.

Irish in the field: Brendan Lawlor, playing on a sponsor’s invitation, makes his European Tour debut alongside Richard McEvoy and Jeff Winthers (9.15am); Paul Dunne is grouped with Ben Evans and Jake McLeod (10.35am); while Jonny Caldwell is in a group with Wilco Nienaber and Alejandro Canizares (2.25pm).

Betting: Marcus Kinhult blew a bit hot and cold in the Wales Open but his game appears ready to be a bit hotter and, at odds of 35/1, the Swede looks a decent punt while Eddie Pepperell at 60/1 looks good each-way value.