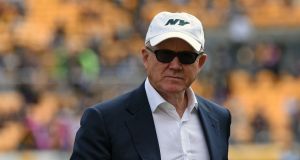 In the most recent season of his sitcom, “Curb Your Enthusiasm”, Larry David’s friend Carl takes his own life, leaving a note that reads, “I can’t take any more disappointment.” Upon hearing this particular detail, Larry immediately concludes the New York Jets are responsible for his death because Carl was an obsessive, long-suffering fan of Gang Green during the half century since their solitary Super Bowl appearance and victory in 1969. At the graveside, he shares his blame conspiracy theory with Veronica, the grieving widow.

“I don’t think he’s the first person they’ve done this to,” says Larry.

For the most recent two decades of spectacular underachievement, the Jets have been owned by Woody Johnson. Great-grandson of the man who founded Johnson & Johnson and heir to a chunk of that company’s billions, he paid $635m for the franchise in 2000. The type of deluded plutocrat who believes inherited wealth somehow bestows great wisdom and facility (sound familiar?), he’s thrown money at the team, invested hugely on and off the field yet hasn’t seen the inside of a playoff game since 2010. The Jets remain synonymous with serial losing and his lacklustre CV features regularly in lists of the worst owners in sport.

No surprise then that astute talent-spotter Donald Trump considered Johnson’s achievement in creating what one writer described as “a culture of celebrated mediocrity” and appointed him America’s ambassador to Britain in 2017. Jets’ fans were thrilled to have him removed from day-to-day operations, relocated 3500 miles from where he could do further harm to this woebegone outfit. That he had no previous foreign policy experience and his only tangible connection to the United Kingdom was once being caught moving $300m through a dodgy tax shelter on the Isle of Man were only minor details.

Given the countries’ strong diplomatic and historic ties, the ambassadorship is largely a ceremonial role, usually given as a reward for hefty political donations and Johnson has brought vast sums into the Republican Party coffers. However, hosting soirées at his Manhattan penthouse designed to elicit cheques from other scions of the wealthy didn’t quite prepare him for the niceties of the Court of St James. Whipping out his phone to fanboy film Queen Elizabeth making a speech was one major breach of etiquette, regularly writing to newspapers chiding the British about their need to buy into America’s use of chlorinated chicken was another.

All of these were merely preludes to him deciding, at Trump’s behest, to petition the Westminster government about getting the Royal and Ancient to award a future British Open to the president’s loss-making golf club at Turnberry. When his then deputy, Lewis A Lukens, warned that was a diplomatic no-no and a contravention of the emoluments clause of the US constitution that prohibits sitting presidents receiving gifts from foreign governments, Johnson ploughed on regardless. Eventually, he raised the possibility of Trump getting his famously small hands on the claret jug at a meeting with David Mundell, then secretary of state for Scotland.

As always in the abnormal new normal, revelations about a willing lackey flagrantly breaking rules to try to assist Trump’s ailing golf brand did no harm to the Teflon President, mere flotsam instantly washed away by the relentless tide of never-ending scandal and 24-hour news cycle controversies. But, that initial story prompted a slew of further leaks about Johnson’s time in London. The allegations range from obsequious, serving wine at official dinners that came from Trump’s vineyard in Virginia (the ambassador says he paid for it from his own pocket), to serious accusations of racism and sexism.

A profile of privilege and entitlement, the charge sheet against him is remarkably Trumpian in its offensive flavour. Aside from calling Lukens “a traitor” and dismissing the long-serving civil servant for making a mildly positive reference to President Obama in a speech, there are complaints about Johnson disparaging “Black History Month”, wondering aloud why he had to address “a bunch of black people”, and questioning what Martin Luther King Jnr ever achieved to have his birthday declared a national holiday.

The 73-year-old refused to get on board with an embassy event about gender-based violence because he’s “not a woman”, recoiled at what he perceived to be the feminism involved in International Women’s Day, and regularly made female staffers uncomfortable with his tendency to comment on their physical appearance and their trips to the gym. His decision to join White’s, the exclusive and notorious gentlemen-only club in Westminster (the place where Prince Charles held his stag party), also meant senior distaff diplomats were unable to attend business lunches he scheduled there.

“Right is right. Wrong is wrong!” tweeted Jets’ safety Jamal Adams in response to these stories, shortly before being traded to the Seattle Seahawks. “If u don’t think this is wrong you’re part of the problem not the solution.”

With reports of morale at the US embassy in London at an all-time low, Johnson has rejected the findings of a State Department investigation into his “inappropriate and insensitive” comments to employees there and, despite supposed increased racial awareness, the NFL has taken no action. Having been made to watch a video about workplace harassment (that’ll learn him!) and warned he may receive training about violating employees’ civil rights, he will stay on as ambassador. After all, who better to represent Trump’s interests at this time?