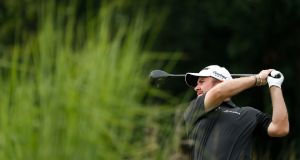 Shane Lowry entered the last chance saloon at the Wyndham and got out the other side, to ensure his advancement into the FedEx Cup playoffs and onwards to Boston for the $9.5 million purse Northern Trust Open. If he is to move on further to Chicago for the second stop in the megabucks series however, the Offalyman will need to find a quick fix to his driving woes.

“If I’m going to try and compete in the next few weeks, I need to start driving the ball a little bit better than I have been,” acknowledged Lowry, who is ranked 109th on the PGA Tour in driving accuracy with a success rate of 60 per cent in finding fairways with his driver. Indeed, he resorted to using 3-wood and on occasion 5-wood in his efforts at the Wyndham, but that tactic won’t be feasible at this week’s Northern Trust at TPC Boston in Massachusetts.

Lowry, with his back to the wall in North Carolina, at least managed to show enough character and had other parts of his game working sufficiently well to finish tied-23rd at the Wyndham and break into the top-125 (in 122nd) on the FedEx Cup standings to ensure his progress on to the Northern Trust. But he will have to do even more if he is to remain on the road, as only the top-70 after Boston make the next step in the journey onwards to Chicago for the BMW Championship.

With a best finish of tied-sixth in the WGC-St Jude Invitational since the PGA Tour’s rebooting, but also three missed cuts in that time, British Open champion Lowry has been blowing hot and cold and found the ordeal at the Wyndham more stressful than he would have liked. As he put it: “You look what I’ve achieved the last year or two, stuff like [trying to get into the FedEx Cup playoffs] should not really be as stressful as it was. But it was. It’s a big deal. We all know if we can make it to Boston that a good week there can do big things.”

Lowry’s aim is to take it week by week and hopefully end up in Atlanta. “The goal [this]\ week would be to make Chicago. Then the goal from there is to make it to East Lake, but that would be a hell of a three weeks. I need to do something very special. But I feel like I’m playing good golf.”

The three tournament playoff series Stateside has a decremental number in the size of fields each week, going from 125 in Boston to 70 in Chicago and finally just 30 players for the Tour Championship in East Lake, Atlanta, where the $15 million bonus will go to the overall champion. Rory McIlroy pocketed the greenbacks a year ago.

In fact, McIlroy – who has been out of sorts since the PGA Tour’s resumption – returns to the fray this week, as does Tiger Woods, and the Northern Irishman will be hoping that a return to happier hunting grounds (he won twice over the track when the tournament was known as the Deutsche Bank Championship) will finally kickstart things since the resumption. McIlroy is currently eighth in the FedEx Cup standings, while Graeme McDowell – who also made it into the plays – is currently 113th.

Lowry, meanwhile, is uncertain of his future itinerary – all depending on whether he can progress to Chicago, if not a few days holiday time with some friends in Rhode Island beckon. But, once his work is done in the United States following next month’s US Open at Winged Foot, the intention is to return home and to “hopefully” line up in the DDF Irish Open at Galgorm Castle in Ballymena, Co Antrim.

“That’s my plan, but we’ll see what happens. My plan is actually to go back to Ireland that week after the US Open. Look, we’ll see how it is. [I’m aware] there’s been quite a few cases over the last few days in Ireland. So, look, I don’t want to make any decisions. What’s it? Six weeks out. I’ll make [my decisions] over the next couple weeks.”