US Open: Rory McIlroy gets the fast start he wanted at Winged Foot 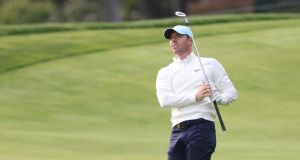 Rory McIlroy plays a wedge to the 11th green during the first round of the US Open at Winged Foot Golf Club in Mamaroneck, New York. Photograph: Jamie Squire/Getty Images 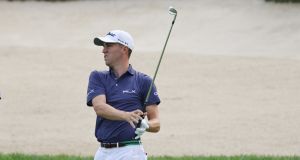 Justin Thomas hits from the fairway on the 12th hole during the first round of the US Open at Winged Foot Golf Club in Mamaroneck, New York. Photograph: Justin Lane/EPA

The body language was more like his old self. On the good shots, and there were many, Rory McIlroy twirled the club with a sense of expectation. On the poor shots, and there were few, the trademark grimace appeared on his face. “I wiped it a bit,” he remarked to his caddie Harry Diamond at one point, of an underhit approach shot.

In the end, though, the 31-year-old Northern Irishman could sign his card in the knowledge that his day’s work had been productive. Unlike some championships of recent years, there was no feeling of having to play catch-up; or that he had shot himself in the foot. On a benign day, of just a gentle breeze and soft greens, McIlroy’s opening round of three-under-par 67 put him straight into the mix.

In fact, in his quest to end a winless drought in the Majors dating back to 2011, McIlroy’s round was his lowest opening round since he compiled a 66 en route to his victory in the PGA at Valhalla, his last of four career Major wins.

It left him two shots off the clubhouse lead held by world number three Justin Thomas, with former Masters champion Patrick Reed on four under following a 66 aided by a hole-in-one on the seventh.

McIlroy’s round featured so much that was good, as if, having struggled for much of recent months in failing to find a spark with no roars of the crowds to fuel his energy, he had recalibrated and found a way to charge his own batteries. His round featured four birdies and a lone bogey, along with a couple of par saves, most notably on the second (his 11th), that showed intent to be a factor in the destination of this 120th US Open championship.

“I put the ball in play much more today than I have done in the previous few weeks. That bodes well. Hopefully I can keep that going over the next three days and that’s what you need to do around here, just keep it in the short stuff, and then the greens are receptive enough where you can give yourself some chances. It was one of those rounds I felt like could have been a little lower than it was. But, at the same time, 67 is a really good start,” observed McIlroy.

Having started on the Par 3 10th, McIlroy hit the ground running with a birdie from 12 feet and then grabbed another two on the Par 3 13th, rolling in a three-footer. He turned in 32, aggressively rolling in an 18-footer with the putt moving right-to-left. His only bogey came on the Par 4 first, where a poor first putt led to a three-putt. His play of the Par 3s was sublime, as he added another birdie on the third before a run of six straight pars.

“In the first round of a Major, you’re always anxious to play well and maybe I’ve overthought it at times. I just went out today and just took what was given to me, a little more relaxed and played really nicely. I think at a US Open, if you can get off to a good start, you’re not chasing as much. And when you chase on US Open golf courses, that’s when you can start to make mistakes and compound your errors. To have that sort of cushion, to be a little more relaxed about your play, not take on too much, be able to still play conservative golf, I think that’s important here,” said McIlroy.

Graeme McDowell, a champion a decade ago at Pebble Beach, struggled to an opening round 76, six-over. From the get-go, he has a battle to survive the cut.

“I did not drive the ball well and I’ve got a bit of work to do. I’m upbeat about the things that I’m doing and I’ve just got to try and keep pushing forward, just kind of reset and try and get back out there [in the second round], see if I can’t sneak in for the weekend and do a little damage on the weekend,” said McDowell.