US Open Take 5: Golfers set to impress this week at Winged Foot 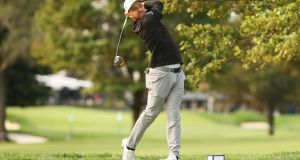 Xander Schauffele drives from the second tee during a practice round. Photograph: Gregory Shamus/Getty Images

World ranking: 7
Age: 26
Betting: 12-1
What’s not to like about Xander? He has yet to make his Major breakthrough but he has knocked at the door, especially when the examination is set at a US Open where the fairways are narrower and the greens faster. Schauffele has a career record of 5th-6th-3rd in his previous US Open appearances and his game, as demonstrated at the recent Tour Championship where he was the “winner” of the “other tournament” (not taking into account the gerrymandered starting scores), is in great shape. He hits it long, but also has a great putting stroke which will be needed on the Winged Foot greens.

World ranking: 22
Age: 36
Betting: 125-1
Leishman has yet to catch fire since tournament play restarted following the shutdown but his early-season form – a win in the Farmers Insurance Open and a runner-up finish in the Arnold Palmer Invitational at Bay Hill – indicates that all of ingredients are there, if only he can rekindle that kind of play. He certainly has the artillery needed for this exam: he is a long hitter, is a great iron player and, on his day, a good putter. And an Aussie won last time, right?

World ranking: 2
Age: 25
Betting: 9-1
Mature beyond his years, the Spaniard has shown a liking for tough courses and conditions: he won the Memorial at Muirfield Village and the BMW at Olympia Fields inside the past two months and, although yet to get his hands on a Major title, he has performed strongly with top-five finishes at the Masters, the PGA and the US Open since 2018.

World ranking: 53
Age: 50
Betting: 80-1
Well, Old Lefty simply has to be part of any storyline, not just because he contended to the death at Winged Foot (shooting himself in the foot on the last hole), but because the US Open is the last elusive link in getting the Grand Slam. A six-time runner-up in the championship, Mickelson has had chance after chance through the years . . . this latest bid comes on the back of some decent recent form, a runner-up finish in the WGC-St Jude and a win on the Champions Tour.

World ranking: 66
Age: 19
Betting: 100-1
Not your average teenager by any means. The Dane has been in sizzling form of late, having clearly put in a lot of work over the summer shutdown: a win in the ISPS Handa UK Championship along with a runner-up finish in the British Masters and a third place finish in the English Championship saw him earn an exemption to Winged Foot off the European Tour mini order of merit for what will be his debut in a Major. Clearly stepping up in class but his price has tumbled from 300-1 down to 100-1 in recent weeks and, with an abundance of confidence, he’s unlikely to be fazed by the challenge.

1 A kick in the teeth for sports, and a nail in the coffin for communities
2 Awarding of 2023 Rugby World Cup to France part of Laporte investigation
3 London Marathon to cut prize fund by nearly half for next month’s race
4 Trump in the rough over playing golf and US Covid-19 fatalities
5 Born to ride, born to win: Sam Bennett, the making of a green machine
Real news has value SUBSCRIBE