In August 2009 in Hazeltine, the South Korean did what no other golfer had done 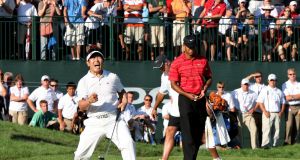 YE Yang of South Korea celebrates a birdie putt on the 18th green alongside Tiger Woods during the final round of the PGA Championship at Hazeltine National Golf Club in Chaska, Minnesota on August 16th, 2009. Photograph: David Cannon/Getty Images

So often sporting upsets are fleeting moments of world-class brilliance from someone who has never, and will never again, reach the same levels of greatness. It’s impossible to tell how it happens in any sport, but particularly in a solo sport like golf where there are no teammates to rise to never-before-seen heights and drag their fellow players along with them.

But on an August Sunday at Hazeltine in 2009, 37-year-old YE Yang had his moment. Ranked 110th in the world with just one European Tour win and one PGA Tour win to his name, he started two shots behind the world number one and 14-time Major winner Tiger Woods – and beat him by three.

Eleven years later, Yang has won just once on the European Tour and missed the cut 15 times in the 25 Majors he has played in since lifting the Wanamaker Trophy. His PGA Tour career earnings come in at just under $9 million. For Woods, that figure is $120 million. Yang only started playing golf at the age of 19. Woods had been hailed as one of the greatest sportspeople of all time since about the day he took his first steps.

Little did anyone know that, just three months later, Woods would crash his Cadillac into a fire hydrant  and the world of golf would be flipped upside down

On the morning of August 16th, 2009, Woods warmed up on the range with a two-shot lead over Yang and Pádraig Harrington, safe in the knowledge that he had won five of the last 10 events he had played that season. He’d won the WGC-Bridgestone Invitational for the seventh time the week before, beating Harrington by four shots. The week before that he’d won the Buick Open for the third time. After winning the 2008 US Open on a broken leg and then undergoing surgery, his return to golf in 2009 had been as smooth as he would have hoped. As sure things go, a 15th Major was as sure as sure could be.

No one could have foreseen what was about to happen.

Between 2002 and 2004, Rich Beem, Shaun Micheel, Ben Curtis and Todd Hamilton had all shown that upsets do happen at Majors.

However, what made Yang’s success all the more remarkable was not only playing with, and beating, Woods in the final group but, in doing so, the South Korean managed to do what no other player had done before or has done since. In his previous 14 Major wins Woods had held the lead after three rounds and had never lost when in that position. The last time he had lost an outright 54-hole lead in any tournament was 13 years previous, when he was a 20-year-old rookie on tour. Somehow, Yang ended that streak by coming from two back on that Sunday in Minnesota.

It was a turning point in Woods’s career and little did anyone know that, just three months later, he would crash his Cadillac into a fire hydrant and the world of golf would be flipped upside down. It would be 10 long years before he took his Major tally to 15.

So just how did a South Korean journeyman, who had grown up wanting to be a bodybuilder, manage to do what no other golfer had ever done?

Well, firstly, it’s worth looking back to 2006 and the HSBC Champions event in Shanghai when Yang came out of nowhere to win by two strokes from none other than Woods. While Yang didn’t play with the world number one in the final round it was an indication that the South Korean’s game could, under the right circumstances, stand up against the best.

After two winless years Yang made his breakthrough on the PGA Tour at the 2009 Honda Classic, beating John Rollins by a shot.

But still, standing on that first tee at Hazeltine on a windy Sunday afternoon five months later, there was no getting away from the fact that the 37-year-old’s chances looked rather slim when his record of one PGA Tour win was stacked up against the 70 of Woods.

Indeed, Yang would not have been standing beside Woods on that tee were it not for a bogey at the final hole from Harrington the evening before which bumped Yang into the last group and meant Harrington – tied with Yang at six under and two behind Woods – would play with Henrik Stenson in the penultimate pairing.

Unfortunately for Harrington, who was the defending champion and bidding to make it four wins in the last 10 Majors, his chances spectacularly unravelled on the par 3 eighth when his tee shot caught the swirling breeze and found the water. A drop, a pulled wedge to the left rough, another ball in the water and another drop would eventually see the Dubliner wind up with a quintuple bogey eight to put paid to his hopes of lifting the Wanamaker Trophy again.

As for Yang, he was already taking the game to Woods early on with a birdie at the par 5 third, followed by a three-putt bogey for Woods at the fourth, leaving the final two ball tied for the lead at seven under.

Poor putting had been a feature of Woods’s play all week and no more so than on the final day when he took 33 strokes on his way round. Indeed his grip on the tournament, which had seemed vice-like after a second-round 70 in howling winds gave him a four-shot lead with 36 holes to play, had begun to slip somewhat on Saturday when Yang’s 67 and Harrington’s 69 had cut his advantage in half.

And while Harrington slipped away in the final round, Yang would not lie down. The madness that follows Woods around in every tournament he plays has always been enough to quench even some of the greatest talents. Two years ago Rory McIlroy said he had a headache after playing the first two rounds with Woods at the Genesis Open and wondered how he managed to deal with it for his whole career.

Yang had never experienced anything even remotely close to the atmosphere on the final day at Hazeltine in 2009, but instead of wilting he revelled in it, even pointing a finger of blame at Woods on the sixth tee when a rules official warned the pair about slow play.

Later he explained the mentality he adopted as he faced up to golf’s biggest star. “It’s not like you’re in an octagon where you’re fighting against Tiger and he’s going to bite you,” Yang said, “or swing at you with his nine-iron. The worst that I could do was just lose to Tiger. So I really had nothing much at stake.”

Tiger’s biggest opponent at Hazeltine was the law of averages. He was simply due for things not to go his way

After Woods twice retook the lead with birdies and twice dropped back into a tie with Yang by following up with bogeys, the pair stood on the 14th tee locked at six under par with the rest of the field trailing in their wake.

In any sporting upset there is a single moment where the reality of what could happen suddenly becomes clear. At the 2009 US PGA, that moment was on the 314-yard par 4 14th when Yang’s drive finished just short of the putting surface, leaving him with a delicate pitch and run up the green which dropped into the hole for an eagle two. Cue wild, Tiger-like celebrations.

Woods himself managed a birdie three but, for the first time in the final round, he now trailed his playing partner by a shot. Both would par the 15th and 16th and bogey the 17th, meaning Yang had a one-shot lead playing the last.

It may have been expected that the nerves would now kick in for Yang while Woods would produce one of the moments of magic he’s so known for. But it was to be the other way around as Yang carved a stunning 210-yard hybrid to 12 feet before sinking the putt to seal a three-shot victory after Woods finished with a bogey.

In his book The Big Miss, Hank Haney – who was Woods’s coach at the time – writes that he believes “Tiger’s biggest opponent at Hazeltine was the law of averages. He was simply due for things not to go his way on the final day of a major, balancing out what had gone so right at Torrey Pines [in the 2008 US Open].”

But the law of averages, or indeed any other laws, don’t really apply to Woods. On that final day he missed seven putts inside 10 feet and watched as his unheralded opponent execute the type of moments that Woods himself pulled off so often.

Perhaps it was poor putting or perhaps there was something more to it, but what is clear is that, for YE Yang, his fleeting moment of world-class brilliance came just at the right time.

Two months later the pair went head-to-head again in the final day singles at the 2009 Presidents Cup, just a month before Woods would crash into the fire hydrant.

The result on that occasion? An emphatic 6&5 win for Woods.