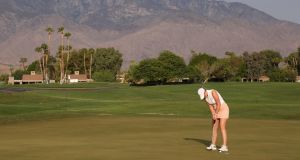 Amateur Olivia Mehaffey from Northern Ireland putts on the second green during the first round of the ANA Inspiration at Mission Hills Country Club in Rancho Mirage, California. Photograph: Christian Petersen/Getty Images

In searing heat in the desert, Leona Maguire kept her cool for much of the opening round of the ANA Inspiration at Rancho Mirage in California. The 25-year-old Cavan golfer, however, stumbled late on with three bogeys in her closing six holes to sign for a first-round score of one-over-par 73, in the season’s second Major championship.

With caddies allowed to use carts if required due to the excessive heat, and with players using umbrellas as protection from the searing sun, world number two Danielle Kang was among those in a group which also included Canadian Brooke Henderson, Malaysia’s Kelly Tan and Chinese player Yu Liu who claimed the clubhouse lead from the early wave of players on four-under-par 68.

Maguire, who earned her place in the field through the category of being currently inside the top-20 on the LPGA Tour order of merit, had a birdie on the third and a bogey on the eighth to turn in level-par 36 and dipped under par again with a birdie on the Par-5 11th, only to falter coming in with bogeys on the 13th, 14th and 16th holes.

Amateur Olivia Mehaffey, from Royal County Down, was also among the early starters and finished with a five-over-par 77.

English player Charley Hull was forced to withdraw prior to the championship after testing positive for Covid-19 while Jenny Shin withdrew after only six holes due to injury. The championship, played behind closed doors with no spectators, saw temperatures reach 100 degrees Fahrenheit and yet players produced some fine scores.

Kang, the in-form player on the LPGA Tour with two wins since the circuit’s resumption, had seven birdies and three bogeys in her round to move into an early share of the lead.

1 Born to ride, born to win: Sam Bennett, the making of a green machine
2 Trump in the rough over playing golf and US Covid-19 fatalities
3 What next for green jersey hero Sam Bennett after toughest of Tours?
4 Saracens’ Michael Rhodes cleared of headbutting Leinster’s Robbie Henshaw
5 A kick in the teeth for sports, and a nail in the coffin for communities
Real news has value SUBSCRIBE