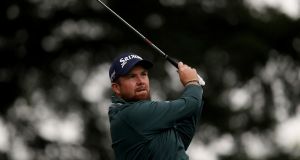 Shane Lowry hits his tee shot on the 11th hole during round one of the Safeway Open at Silverado Resort in Napa, California. Photograph: Jed Jacobsohn/Getty Images

Shane Lowry, with a new armoury of clubs in his bag, produced some of his old form in the first round of the Safeway Open at Silverado in California

The 31-year-old Offalyman, who included the event on his schedule as a precursor to next week’s US Open, opened with a well-crafted four-under-par 68 in the first round of the new PGA Tour season.

Playing alongside Phil Mickelson and course specialist Brendan Steele, a two-time winner of the tournament – Lowry had a solid front nine which featured a bogey on the 13th, where he drove into rough down the right, and a birdie on the Par-5 18th where he rolled in an eight-footer.

However, Lowry reserved his best play for his back nine, where he went bogey-free and claimed four birdies. He got the run going with a birdie when hitting a wedge approach to 12 feet on the third; played an exquisite shot from a fairway bunker to 12 feet on the fourth to claim back-to-back birdies; then hit a wedge to 12 feet on the eighth and finished in style with a six-footer for birdie on the Par 5 ninth.

Séamus Power, after a strong start, eventually signed for a 75 which included a nightmare run of four successive bogeys from the 12th.

Scotland’s Russell Knox, a former Irish Open champion, who is without a top-10 finish on the PGA Tour going back to the Charles Schwab Challenge in May 2019, and down to 208th in the latest world rankings, rekindled some of that old form to claim the first round lead with a bogey-free 63. That featured an eagle and seven birdies, leaving him one shot clear of Australia’s Cameron Percy and Americans Sam Burns and Brendan Steele.

Mickelson, who turned 50 in June and recently won on his Champions Tour debut, found things a little more difficult as he opened with a one-under-par 71.

Knox, 35, started slowly after hitting his first tee shot into the rough, but built steadily throughout the day after his first birdie on the fourth hole.

After play, he said: “I worked as hard as I ever have the last two weeks before this event, so it’s really nice to see something good happen immediately. I definitely feel like my game is heading in the right direction.”

The tournament takes place in northern California’s Napa while much of the US west coast battles wildfires, with players preparing for next week’s US Open at Winged Foot in New York.

Collated first round scores and totals (USA unless stated, par 72):

1 Born to ride, born to win: Sam Bennett, the making of a green machine
2 Trump in the rough over playing golf and US Covid-19 fatalities
3 What next for green jersey hero Sam Bennett after toughest of Tours?
4 Saracens’ Michael Rhodes cleared of headbutting Leinster’s Robbie Henshaw
5 A kick in the teeth for sports, and a nail in the coffin for communities
Real news has value SUBSCRIBE