Scottish course in contention to hold Major tournament after 2021 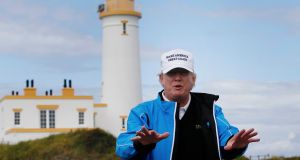 Nothing that Donald Trump has done since becoming president of the United States has changed the prospects of his Turnberry course hosting the British Open, according to the R&A.

Royal St George’s was announced as the host of the 2020 British Open on Monday, with the 150th edition the following year to be held at St Andrews, but Turnberry – owned by the Trump Organization – remains in contention to host golf’s oldest Major again after 2021.

Golf’s most influential organisations had previously distanced themselves from president Trump in the wake of his views on Mexican immigrants, which were expressed when the 70-year-old announced his decision to stand for the Republican nomination in 2015.

However, Turnberry remains firmly on the British Open rota, a rota set to be boosted to 10 courses if Muirfield votes to admit women members – at the second time of asking – next month.

R&A chief executive Martin Slumbers said: “I said last year we were focused on Turnberry as a golf course and there has been nothing that has happened in the last year to change that.

“Turnberry remains absolutely as one of our nine golf courses – 2020 and 2021 did not involve Turnberry and we’ll not be thinking about 2022 for at least another year.

“I think it’s very important that we’re clear about what our business is, which is making sure that the Open Championship is one of the world’s greatest sporting events, and staying out of politics.

“We are clearly now in uncharted territory. Sitting presidents have attended US Opens. We have not had a sitting president of the United States at an Open Championship.

“We’re all learning as we go through this. But I think it’s important for us that we understand where the game is and make sure we keep to that, without ignoring all the other factors that go around it.”

Slumbers said he believed president Trump had been “good for golf” in terms of the renovation of a number of his courses and that he would accept an invite to play golf with him, as Rory McIlroy did at the weekend.

“With all senior people in the world, I think it’s polite and respectful to listen to them and work with them,” he added. “It’s very important that we work with the president if Turnberry did come back on. That would just be foolhardy not to.”

As for Muirfield, Slumbers intimated that the R&A would respond as swiftly to a positive vote on women members as it did when removing the East Lothian course from the British Open rota after last May’s ballot narrowly failed to achieve the two-thirds majority required.

“Muirfield is a wonderful golf course, it’s a great Open venue,” Slumbers added. “We’re very pleased they are going through that process and we wait to see the outcome.

“We would reconsider and make an announcement very quickly if that vote comes through positively.”

The venue for the 2020 Olympics in Tokyo is also under scrutiny for its membership policies, with women members at Kasumigaseki Country Club not enjoying full playing privileges.

The International Golf Federation has threatened to find another course if the club does not change its rules and Slumbers added: “We are waiting to see how the clubs reacts and we will act accordingly.”

Royal St George’s, which voted in March 2015 to admit women members, will stage the British Open for the 15th time and the first since Darren Clarke held off the challenge of Phil Mickelson and new world number one Dustin Johnson in 2011.

“It was an unbelievable feeling to lift the Claret Jug and know that my name was displayed on the trophy alongside so many of the greatest players ever to play the game,” Clarke said.

“The Open is what it is all about for me as a golfer and it is the championship I always dreamt of winning from when I first took up the game as a kid.

“I have so many wonderful memories from that week at Sandwich and I will be thrilled to go back there for The Open in three years’ time.”