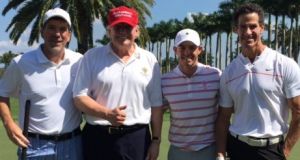 Rory McIlroy played a round of golf with US president Donald Trump at the weekend as he continues his recovery from a stress fracture to his ribs.

McIlroy has been quite coy about his comments on Trump, both throughout the presidential election campaign and during his term so far.

However, the four-time major winner told No Laying Up that he made an exception this weekend to play with the president at Trump International.

McIlroy said he was not due to play this weekend but that he got a late call to join Trump, Kildare-born Nick Mullen (an agent with ISM), and Trump’s friend Rich Levine.

Former New York Yankees baseball player Paul O’Neill and Clear Sports CEO Garry Singer were also present and pictured with McIlroy and the president but McIlroy said the pair were not part of the fourball.

“He probably shot around 80. He’s a decent player for a guy in his 70’s!” McIlroy said of the president who claims to have a handicap of 2.8.

McIlroy has not played a competitive round since the SA Open in January but says he is well on track to return to action at the WGC-Mexico Championship which begins Thursday week.

The former world number one accompanied the president in a golf cart for the full round and he also said that he played off the forward tees but did hit some drivers, and that TrackMan was telling him that his swing was nearly at full speed.

Trump played with Ernie Els last week and also joined Tiger Woods for a round just before Christmas.

The president owns 17 golf courses worldwide – including Trump National Bedminster which will host this year’s Women’s US Open and the 2022 US PGA Championship, as well as Turnberry in Scotland which features on the British Open rota.

One of McIlroy’s first encounters with the 70-year-old was in 2014 when Trump had his three iron pulled from the bottom of a lake at Doral after McIlroy flung it into the water in disgust.

The club is now on the wall of the clubhouse in the resort owned by Trump. A resort which had its long association with the PGA Tour ended last year when it was decided that the WGC Cadillac Championship would, ironically, be moved to Mexico.

In response to that news McIlroy said that they would all just have to “climb over the wall.”