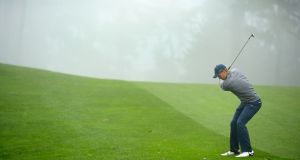 Jordan Spieth moved to the top of the leaderboard with a second round 65 in California. Photograph: PGA Tour/Stan Badz

Jordan Spieth produced a birdie-fest to take a share of the lead of the AT&T Pebble Beach Pro-Am as weather continues to cause disruption.

After completing the final two holes of his first round which was cut short by inclement weather on Thursday, the two-time major winner then fired eight birdies in his seven-under-par 65 to sit at the top of the leaderboard on 10 under after the second round.

He is joined by Derek Fathauer at the summit after the American produced a blemish-free 64 through 17 holes when fog descended in California and wiped out the the rest of the day’s play just after 4pm.

Shane Lowry and Seamus Power are both three under par with their second rounds halted through 10 and 12 respectively.

World number one Jason Day is a shot back on nine under and he will fancy claiming the halfway lead when he completes the remaining six holes of his second round on Saturday.

Justin Rose is on one under with four holes to play as much of the field are forced to finish their second rounds on Saturday.

Each player and their celebrity partner plays one round at Pebble Beach, Spyglass Hill and Monterrey Peninsular Country Club over the first three days, with the leading 25 pro-am teams and top 60 professionals and ties returning for the final round at Pebble Beach on Sunday.

4 Blackmore admits to sleepless night as she relived Aintree heroics

Blackmore admits to sleepless night as she relived Aintree heroics 18:37
Matsuyama’s crowning glory at Augusta always seemed his destiny 18:30
Munster and Ireland flanker Tommy O’Donnell to retire at end of season 15:43
France will travel to Dublin to play Ireland after being granted exemption 14:35
Once pain of defeat eases Frampton will be glad it is all over 14:03
Here is your handy guide to sport on television this week