Tiger Woods writes off two more events over back spasms 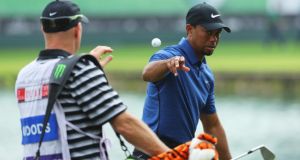 Tiger Woods withdrew from the Dubai Desert Classic after the first round due to back spasms. Photograph: Warren Little/Getty Images

Tiger Woods has announced he will be unable to compete in two more tournaments as he continues to battle back spasms.

The 14-time Major winner last week pulled out of what was just his third event since August 2015, withdrawing before the start of Friday’s second round at the Dubai Desert Classic.

Woods, 41, who failed to card a single birdie at Emirates Golf Club, insisted he had not suffered an injury setback after an opening 77, but has now said he will also have to miss the next fortnight’s PGA Tour action – the Genesis Open and the Honda Classic – on medical advice.

“My doctors have advised me not to play the next two weeks, to continue my treatment and to let my back calm down,” Woods said on his website.

“This is not what I was hoping for or expecting. I am extremely disappointed to miss the Genesis Open, a tournament that benefits my foundation, and the Honda Classic, my hometown event. I would like to thank Genesis for their support, and I know we will have an outstanding week.”

Woods posted the link to his statement on his Twitter account on Friday, indicating he still planned to attend next week’s tournament in Los Angeles.

“Really looking forward to seeing everyone [at] genesisopen open next week, unfortunately I won’t be able to play,” he wrote.

The former world number one is now ranked outside the top 650 and is without a win since 2013, with his last Major title coming at the 2008 US Open.