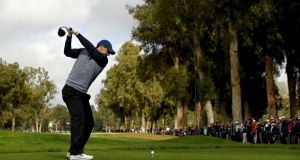 Rory McIlroy hits a tee shot on the 11th hole during the final round of the Genesis Open at Riviera Country Club in Pacific Palisades, California. Photo: Harry How/Getty Images

After a seven-hour delay on Thursday and three marathon days to follow, the final day of the Genesis Open produced drama that would not look out of place in Hollywood as JB Holmes eventually came out on top of the pack with the last dregs of daylight fading across a windswept Riviera Country Club in downtown Los Angeles.

Play began at 6.45am local time on Sunday morning with the majority of the third round still to complete and didn’t finish until 4.58pm – over 10 hours later. The new rules implemented by the R&A and the USGA this year were, in part, supposed to speed up play. The five hours and 28 minutes that it took JB Holmes, Justin Thomas and Adam Scott to play the final round would suggest differently.

But while it didn’t have the speed, this final round had more twists and turns than even the biggest of rollercoasters. For Rory McIlroy it was a third top-five finish in his three starts on the PGA Tour this year but again it was tinged with frustration. Not the frustration felt at Torrey Pines or in Hawaii where he went into the final day with a real winning chance only to fade away, but some frustration nonetheless. McIlroy started the day at nine under, eight shots behind leader Thomas and, despite shooting a final round of 69 for 11 under par, he will feel he could well have claimed a first win since last year’s Arnold Palmer Invitation.

An eagle at the first for McIlroy pulled him closer straight away but Thomas looked like he would run away with it after a birdie of his own at the opening hole. However, three bogeys in the next five holes saw him fall into a share of the lead with Holmes who had picked up two birdies of his own in the first five holes. Suddenly, after appearing so unshakeable through his first three rounds of 66, 65 and 65, Thomas looked vulnerable.

As Scott faded throughout the final round, the battle was fought between Thomas and Holmes with McIlroy occasionally coming into the fray but never really laying down a strong winning claim. With a birdie at the seventh McIlroy moved closer to the lead and then came a moment that could have really thrown the Co Down man into the mix. With Thomas facing 14 feet for par at the seventh, McIlroy had 11 feet for birdie at the ninth and a possible chance of moving within a shot of the lead.

But on such moments do golf tournaments hinge. Thomas rolled his par putt right into a centre while McIlroy left his birdie effort a few inches short. The difference remained at three and Thomas had reclaimed the solo lead after Holmes dropped a shot at the seventh.

A frustrating bogey at the driveable Par 4 10th for McIlroy saw him slip a further shot behind but he quickly clawed one back with a birdie at the Par 5 11th.

And the topsy-turvy nature of the day showed no signs of abating. A bogey for Thomas at the 10th and a birdie for Holmes meant that, for the first time since the second round, Thomas was out of the lead.

However, that didn’t last long. A birdie for Thomas at the Par 5 11th and an inexplicable three-putt by Holmes from no more than four feet meant that the two-shot swing on the previous green had swung back on itself.

With the wind beginning to really whip up a storm and the greens getting ever drier and faster by the second, McIlroy was still in with a chance despite a bogey at the Par 3 14th which saw him fall four behind.

Perhaps it was the fatigue of a long day playing its part but, in the final group, the drama on the greens was just getting started. With Holmes facing 10 feet for par on the 13th and Thomas looking at about the same from half that distance, it looked like the 2017 US PGA champion was about to extend his lead.

But a clutch putt from Holmes and three stabs from Thomas later meant the tournament had turned on its head again and Holmes now lead by one. At the same time, McIlroy was showing some wizardry of his own by holing out from the bunker at the Par 3 16th for a birdie to get within two of the lead.

And Thomas’ travails weren’t over. Another three-putt at the Par 3 14th saw him drop another shot and slip two behind Holmes who made a routine par.

After two booming shots up to the left of the green at the Par 5 17th McIlroy knew he would need to get up-and-down and at least par the last to post a number and have a chance. However, a good pitch to eight feet at the 17th was not followed by the putt to match and, with a bogey five at the final hole after an approach shot which came down well short of the pin, the 29-year-old posted a total of 11 under par to finish three shots off Holmes’ winning score.

“Honestly I didn’t really know where I stood on the back nine, I was trying to just keep my head down and plug away,” McIlroy told Sky Sports afterwards.

“I didn’t really think I was in contention and then when I held the bunker shot at the 16th I took a peek at the board and saw that I was only two behind. So right then, with two holes to play downwind ... but even the downwind holes are pretty tricky. I think out there in those conditions 69 was a pretty good score.

“It was very tough. I had the bogey on 10 and then the birdie on 11. And 12 through to 16 are just brutal right into the teeth of the wind. I played them in even par which I think was a pretty good achievement today. I did all the hard work going into the last two holes but didn’t quite finish it off. But it’s another good week and going into Mexico [for next week’s World Golf Championship] hopefully the conditions aren’t quite as tough.”

Back at the Par 3 16th, Holmes showed some serious bottle when he sunk an 11-foot par putt to stay at 14 under but he wasn’t home and dry just yet as Thomas followed him right in with a birdie putt to get within one.

Another three-putt from Holmes at 17th saw him squander a birdie chance after he’d hit the green in two but he was granted a reprieve by Thomas who also slid a good birdie chance past to remain one behind going up the last.

Thomas gave himself a chance at the birdie three which was needed to force a playoff but he couldn’t get his putt to fall, leaving the way clear for Holmes to two-putt and wrap up the fifth PGA Tour win of his career.

Earlier, Tiger Woods went out in two under par but three scrappy bogeys on his way in added up to a final round of one over par 72 for a total of six under at the tournament where Woods made his debut as a 16-year-old amateur in 1992 but one he has never won.

And, after making just his second cut in 10 attempts to far this season, Waterford’s Séamus Power did not have the weekend he would have hoped for with a final round 73 adding to a third round 75 for a total of five over par and a tie for 64th.