Matt Kuchar apologises and agrees to pay caddie in full 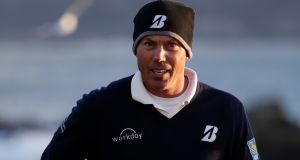 Matt Kuchar has issued an apology and said he will pay a temporary caddie in full following his victory in the Mayakoba Golf Classic last November.

World number 22 Kuchar collected a winner’s cheque for $1.3 million (€1.15 1 million) after ending a four-year winless drought and caddies can usually expect to receive up to 10 per cent depending on their arrangement with the player.

“This week, I made comments that were out of touch and insensitive, making a bad situation worse,” Kuchar said in a statement.

“They made it seem like I was marginalising David Ortiz and his financial situation, which was not my intention. I read them again and cringed.

“That is not who I am and not what I want to represent. In this situation, I have not lived up to those values or to the expectations I’ve set for myself.

“I let myself, my family, my partners and those close to me down, but I also let David down.

“I plan to call David (on Friday night), something that is long overdue, to apologise for the situation he has been put in, and I have made sure he has received the full total that he has requested.”

Kuchar, who said earlier this week he would “not be losing sleep” over the row, confirmed he had paid Ortiz $5,000 and that he subsequently offered an additional $15,000, which Ortiz refused, after the story became public.

According to Kuchar, he and Ortiz originally agreed to a bonus structure which would have allowed Ortiz to make up to $4,000 US dollars for the week.

“I never wanted to bring any negativity to the Mayakoba Golf Classic,” Kuchar added.

“I feel it is my duty to represent the tournament well, so I am making a donation back to the event, to be distributed to the many philanthropic causes working to positively impact the communities of Playa del Carmen and Cancun.

“For my fans, as well as fans of the game, I want to apologise to you for not representing the values instilled in this incredible sport.”

Corofin combine total football with dark arts for three-in-a-row 20:03
Salah seals the deal as Liverpool see off a dogged Man United 18:39
Connacht huff and puff but Montpellier pull away at the end 18:36
Hockey: Ireland strike late on to claim bronze 17:55
Champions Cup: Leinster meet Saracens and Ulster face Toulouse in quarter-finals 17:13
Here is your handy guide to sport on television this week