Michael Hoey the leading Irishman at Super 6s in Perth 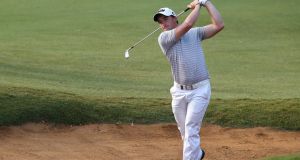 Paul Dunne plays out from a fairway bunker on the 11th hole during day one of the ISPS Handa World Super 6 Perth at Lake Karrinyup Country Club in Perth, Australia. Photo: Paul Kane/Getty Images

Michael Hoey continued his good recent form in Australia with a first round 68 for four under par at the ISPS Handa World Super 6 in Perth, a day after celebrating his 40th birthday.

The round leaves Hoey tied-fifth and three off the lead held by Miguel Tabuena and Kristoffer Reitan at Lake Karrinyup, but crucially he is inside the top-24 who will advance to Sunday’s matchplay phase.

The tournament takes on a regular strokeplay format for the opening two days with the cut coming on Friday for the top-65 and ties before a further cut is made on Saturday evening for the top-24 players. If there are ties a playoff will be held to narrow the field down with those 24 then heading into the matchplay stage.

The top-eight will advance directly to the second round while the other 16 will begin the knockout matchplay stages which will be played over six holes until a winner is determined.

Both Paul Dunne and Gavin Moynihan will have work to do to make those knockout stages after disappointing first rounds. For Dunne an opening round of 73, made up of three bogeys and two pars, leaves him one over par and tied for 81st while Moynihan is a shot further back after a double bogey at the 16th saw him sign for a 74.

There were no such troubles for Hoey who carded consecutive birdies at the 13th, 14th and 15th to help towards his 68. The five-time European Tour winner – making just his fourth appearance on the circuit this season – comes into this week off the back of a tied-17th place finish at the Handa Vic Open last week which could have been better were it not for a 75 in the third round.

At the top of the leaderboard, Norway’s Reitan and Tabuena of the Philippines carded opening rounds of 65 to get to seven under.

After starting from the 10th at Lake Karrinyup in Perth, Tabuena birdied his first seven holes and picked up another shot on the 18th to race to the turn in just 28 shots.

The 24-year-old also birdied the first but could not maintain such a blistering pace and dropped shots on the fifth and ninth to finish seven under par alongside Reitan, who carded eight birdies and a bogey.

“My alarm was 3:30 in the morning, but it paid off and I’m pretty happy with my position,” Tabuena said. “I love coming to Perth and it feels like home. The weather’s similar, the courses are similar, and it’s great to be back.

“I tried to keep it (his score) in the back of my head but it caught up to me on the third and fourth hole. I started to force some stuff, which I shouldn’t have, and it cost me.”

Reitan came through all three stages of the European Tour’s qualifying school as an amateur last year. The world number 1,890 is playing just his fifth event since turning professional.

The 20-year-old said: “Last year I qualified for the US Open and qualified for the European Tour through Q-School, so it’s something maybe with the qualifying mindset that I enjoy. I hope it can work to my advantage this week.

England’s Richard McEvoy and New Zealand’s Benjamin Campbell lie two shots off the lead in the innovative event, which features 54 holes of traditional strokeplay before the top 24 players compete in a six-hole knockout match-play format on Sunday.

1 Tipping Point: DeChambeau’s transformation raises questions, but who will ask them?
2 Ken Early: Resurgent United can be the top team – in Manchester
3 TV View: Stunned silence as Serpentine wins a socially-distanced Derby
4 The Game Changers: How Jonah Lomu’s dramatic arrival heralded rugby’s new dawn
5 John Maughan: This year's All-Ireland will be tainted, whoever wins it
Real news has value SUBSCRIBE

Ken Early on resurgent Man United, Malachy Clerkin on De Chambeau’s new look 07:46
Tipping Point: DeChambeau’s transformation raises questions, but who will ask them? 07:00
John Maughan: This year's All-Ireland will be tainted, whoever wins it 06:45
Ken Early: Resurgent United can be the top team – in Manchester 06:46
TV View: Stunned silence as Serpentine wins a socially-distanced Derby 06:00
Here is your handy guide to sport on television this week