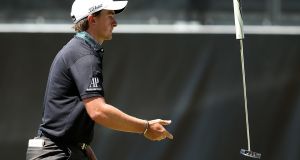 Paul Dunne may not have putted the way he wanted in his semi-final loss to Ryan Fox at the ISPS Handa World Super 6s in Perth but at least he still had it. Photo: Paul Kane/Getty Images

Luckily for him, Paul Dunne has a habit of taking his putter with him – back to his hotel room, or rented house for some late-night practice – when on tour, which helps explain why he escaped the anguish of many players at the World Super 6 who had their blades stolen at the crucial matchplay phase of the tournament.

Once considered the most secure place on a golf course, the locker-room’s sanctuary was breached time and time again during the European Tour stop in Western Australia: among those players to have putters disappear from their bags at the exclusive club in Perth were Wade Ormsby, Connor Syme, Per Langfors, Andrew Martin, James Morrision and Adrien Saddier.

There were other reports of golf balls, towels, hats, gloves and even bottles of wine disappearing from players’s bags and lockers during the tournament.

Australian police have examined CCTV footage in an attempt to apprehend the putter thief but, for the players involved, having the most used club of all disappear into thin air was far from a laughing matter.

As Scotsman Syme pointed out on his social media post, the putter in question is a custom-made once-off that was manufactured by Ping and is easily identifiable. “(It) has my name on the back and initials on the front,” tweeted Syme, a rookie on tour.

Australian Ormsby at one stage threatened not to play any further part in the competition after his putter was stolen from what is perceived to be the safe haven of the locker-room. He described it as “not a nice feeling” and also appealed for his custom made black square-back putter – in this case the work of Scotty Cameron – to find its way back to him.

The disappearance of players’ clubs from locker-rooms is no longer the exception, unfortunately. Just at the end of last season, web.com tour player Cody Blick – who used borrowed clubs to shoot a 63 in the final qualifying round to secure his PGA Tour status – had a full set stolen on him.

Those clubs eventually found their way back to the American after a woman bought them from a homeless man for $65 and then, after noticing the player’s name engraved on club faces, made contact with Blick’s mother and returned them for a price tag of $300.

In Blick’s case, though, Titleist had managed to reproduce an exact version of the clubs and the returned clubs – with some damage – were put into a glass case as some sort of trophy . . . . or perhaps a reminder of how careful players need to be with the most important tools of their trade!

Maybe players need to take a leaf out of Dunne’s book and take security into their own hands.