Rory McIlroy stutters in first round of Genesis Open 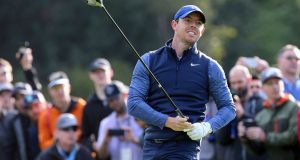 Rory McIlrot stuttered to an opening round of 71 in LA. Photograph: Reed Saxon/AP

The stop-start nature to the weather-delayed first round of the Genesis Open at the famed Riviera Country in Los Angeles was encapsulated by Rory McIlroy’s stuttering form, where the Northern Irishman - with an array of booming drives and birdie chances - struggled with a cool putter that frustrated his best efforts to the point that even his driver ultimately betrayed him.

As Jordan Spieth’s seven-under-par 64 enabled him to claim the first round lead in a tournament playing catch-up after two inches of rain in a 24 hour period disrupted Thursday’s first round (losing seven hours of playing time) and saw players utilising lift, clean and place on fairways during Friday’s play, McIlroy failed to take full advantage of scoring conditions and signed for an opening 72, one-over-par.

Early on, McIlroy looked set to make an impact. Birdies on the opening Par 5 first hole and another, from 20 feet, on the eighth moved him to two under. But it all changed around the turn, and into the run for home: McIlroy’s woes were showcased by his run from the ninth, where, after a 320-yard drive to the Par 4 and with just a sand wedge in hand, he followed with a three-putt bogey. He failed to birdied either the short Par 4 10th or the Par 5 11th and then suffered bogeys on the 12th and 13th.

His play of the 13th effectively summed up his travails. A pulled drive down the left clipped tree branches and finished in rough, and his second shot hit trees to again nestle in rough. Although he found the green with his third, his 15-footer for par failed to drop. As if to sum up his troubles, even the simple task of unfolding an umbrella proved to be a chore for McIlroy when, as the rain poured down on the 17th, it briefly caught him in the head as he sought to get protection from the elements. More worrying, though, was his failure to sink a four-footer for birdie as his putter stayed cold.

Having got off to a decent start, two under through seven holes, McIlroy failed to keep his foot on the accelerator and, instead, shifted into reverse gear for the remainder of the journey. Apart from poor putting, another issue was finding only 50 per cent of greens in regulation.

After a huge drive on the Par 4 18th, McIlroy - with a short iron in hand - again saw his approach leak to miss another green, and he was forced to scramble for his par save as he signed for an opening round of one over par 72. Justin Thomas, despite a double-bogey on the 12th, finished strongly with birdies in two of his three closing holes for a 66 while Tiger Woods signed for a 70.

Woods, playing alongside McIlroy and Thomas in a marquee group, was two-over through seven holes but overcame his slow start to kick into life with a run of four successive birdies - from the eighth to the 11th - that turned his round around.

That birdie blitz was the highlight of Woods’s round, in a tournament which he has played more than any other in his career - 12 - without managing a win. Woods, though, stumbled with a bogey on the Par 5 17th where he missed a three-footer for his par.

Spieth, without a win on tour since his 2017 British Open success, had started his round on Thursday and completed it Friday with a bogey-free 64. He chipped in twice in observing the course set was “as gettable as it can possibly be right now.”

The 25-year-old American - like others - heads into the weekend anticipating spending a lot of time on the course as tournament officials bid to play catch-up having lost so much play on Thursday due to the weather. “I’ve had to play 30 holes, 36 holes in a day . . . it can be taxing. It’s tough, spongy ground, it will wear on you a bit if you’re not careful. It’s all about trying to save as much energy as possible more than anything else.”

The challenges of preparing and playing in weather-disrupted tournaments was summed up by Tony Finau, who opened with a 66: “I think we deserve some chill time after a couple of 4am wake-up (alarm) calls . . . emotionally we were kind of prepared for it.

“I saw the weather forecast for the week and knew it could be something similar to the AT&T last week at Pebble Beach, so mentally and emotionally you’ve got to prepare,” said Finau, aware that further weather disruptions - and another Monday finish - could yet be in the offing.