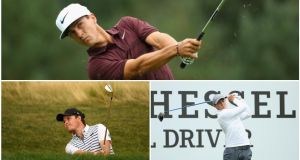 European captain Thomas Bjorn wants his Ryder Cup hopefuls to “take control” of their destiny in the final qualifying event at his home club in Denmark.

Olesen occupies the final automatic qualifying place and can make certain of a Ryder Cup debut with a top-six finish at the Made in Denmark event, with England’s Eddie Pepperell and Matt Fitzpatrick needing to win and hope the Dane finishes down the leaderboard.

“It always comes down to the last qualifying event that somebody can do something so as a captain you want to see them go out and take control of the situation,” Bjorn, who will play the first two rounds alongside Pepperell and Martin Kaymer, told Sky Sports News.

“Eddie and Fitz have a lot to do in the way they need to win the golf tournament so it’s a big ask, but they are very capable of doing that. You’ve just got to sit on the sidelines and have a good look at it. It’s going to be interesting.”

Fitzpatrick, who lost both of his matches at Hazeltine in 2016, won the second qualifying event in Switzerland in September but has recorded just two top 10 finishes in 2018.

“It’s been my main goal to make the team all year but at the same time if it doesn’t happen, I’ve not played well enough to get myself on that team and that’s just the way it is,” the 23-year-old said. “I know what I need to do and it’s pretty simple really.

“Having the experience that I had (in 2016), not playing as much as I would have liked was obviously very disappointing after qualifying for the team, so it would be nice to make amends for that, particularly given that the team this year looks considerably different to the team last time.”

Olesen admits it is hard to avoid thinking about the Ryder Cup after a brilliant run of form this summer vaulted him into contention, but believes playing in front of a home crowd could work in his favour.

“It makes it easier to play this because it’s such a big event,” the 28-year-old said. “It’s an event I’ve dreamed of winning since we started it so that’s what I am trying to do, see if I can put myself in good position on Sunday and have a chance on the last eight or nine holes.”

Olesen will play the first two rounds alongside vice-captain Lee Westwood and Belgium’s Thomas Pieters, who is hoping to repeat his 2016 win in this event to boost his chances of a wild card.

“I did it last time but there’s so many good players trying to get in that are a lot closer than me as well, but a win or something close could do well here,” Pieters admitted.

Bjorn has four wild cards at his disposal but at least five strong candidates, with Pieters, Paul Casey, Ian Poulter, Sergio Garcia and Henrik Stenson all in need of a favour from the European captain.

“The idea of the picks is to be able to pick people that are coming into form and Thomas is probably coming into form more than anybody so it will be nice to have a look at him on the last week of qualification,” Westwood said.

“I played with him that first match (at Hazeltine) and didn’t play particularly well or he could have come out of it with five wins. His performance was brilliant that week, he certainly upped his game and looked very comfortable playing with Rory (McIlroy) so there’s a lot of positives on Thomas’ side really.”

Garcia’s poor recent form is more of a concern but Westwood added: “Sergio has played average going into Ryder Cups before and then when it comes round he really loves that atmosphere and ups his game and becomes a different player.

“Sergio is a tricky one because of his form but also because of the way he does play at Ryder Cups and his record.”