Harrington two off the pace in Prague 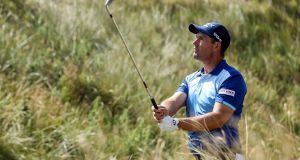 Padraig Harrington is just two shots off the lead at the Czech Masters.

Padraig Harrington will start Saturday’s third round of the Czech Masters two shots off the lead as he chases a first win since 2016 - and just his second on the European Tour since 2008 - following a round of 68 in Prague.

Harrington birdied his final hole at the Albatross Golf Resort to finish on 10-under par, two shots adrift of Malaysia’s Gavin Green who will take a slender lead into the weekend as the battle for Ryder Cup places continues to simmer under the surface.

Harrington made a birdie and a bogey before a weather delay but a stunning approach to the 18th moved him back into red numbers. Back-to-back birdies on the fifth and sixth edged the Irishman further up the leaderboard and he made it to 10-under with a 15-foot putt on the ninth.

As with Harrington, Green added a second round of 68 to his opening 64 for a halfway total of 12-under par and one-shot lead over Denmark’s Jeff Winther, with Harrington, Thomas Pieters, Andrea Pavan and Tapio Pulkkanen a shot further back.

Pieters needs to rely on a wild card to claim a place in the European side which will seek to regain the Ryder Cup in Paris next month, while England’s Eddie Pepperell, who could move into the automatic qualifying places with a win at Albatross Golf Resort, is five off the pace after a 71.

“It’s fun to be leader and it’s been a while since I’ve been in this position so I’m going to enjoy it,” Green, who is seeking a first European Tour title said. “My dad’s on the bag so we’re going to have a nice dinner maybe and a good sleep and continue tomorrow.

“I kept to the same game plan as yesterday, hitting the driver everywhere and being pretty aggressive and I was in the rough a couple of times and the fairway a couple of times. It’s nice having wedges into par fours though, makes it a little bit easier and you can control the spin. That gives you a lot better looks at birdie so I controlled it well and did pretty well so I’m happy.”

Pieters won a record four points on his Ryder Cup debut at Hazeltine in 2016 after being given a wild card by captain Darren Clarke following a runners-up finish in Prague and victory in Denmark the following week.

“It was obviously more difficult with the wind today but I didn’t make enough putts,” Pieters said after shooting a 70 alongside Harrington. “It was a disappointing finish missing two short ones coming in but overall I’m not unhappy with the position I’m in going into the weekend. I’ve been striking it really well, it’s just the putting that has let me down so I need a good putting week and I really like the greens here.”