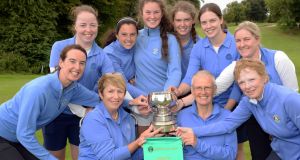 Lahinch are ILGU Irish Senior Cup Champions for the first time in the 126 years history of the club having overcome Royal Portrush, The Heath and Elm Park on their way to victory. The experienced team which included no less than three past and current Internationals in Aine Donegan, Sarah Cunningham and Sinead Sexton, was completed by Aideen Walsh and Niamh O’Dwyer who both represented Munster at this year’s Women’s and Girls’ Interprovincial Matches.

Walsh, who was drawn to play Irish Girls’ Close semi-finalist Emma Fleming, was first to secure a point for the Clare team in the All-Ireland Final but it didn’t take long for Donegan, Cunningham and O’Dwyer to follow suit and crown Lahinch as All-Ireland Senior Cup Champions 2018.

Lahinch are just the second team from Co. Clare to claim All-Ireland Senior Cup victory after Ennis won the title in 2007 at Milltown.

Stackstown’s John McCarthy added a 76 to his previous rounds of 69 and 72 to win the Leinster Students Amateur Open Championship, at Killeen GC finishing on a score of 217, one over par. William Small (Tandragee) came in second place, finishing with an excellent third round one under par 71 to give him a total of 218 just one shot behind the winner. Third place went to Jamie Knipe (Royal Portrush) who had a final round of 75 to finish on a score of 220.

John Mitchell from Tramore won the Leinster Seniors Amateur Open Championship at Luttrellstown Golf Club. Mitchell won in dramatic fashion shooting a second round 75 to add to his first round score of 74 to finish on 149 and claim the title on the last three holes over Barry Hobson of Malone. Both players were level until they reached the 17th hole with Mitchell securing a birdie over Hobson’s bogey. Mitchell’s card included three birdies and six bogeys while Hobson’s 75 included two birdies and five bogeys.

City of Derry’s Ernie Heywood took third place shooting the only under par round of the day 71 to finish on 151 with Liam Halpin (Westport) claiming fourth place on 152 and Maurice Kelly (Naas) finishing fifth on 153.

Ireland are the reigning European champions having captured their sixth title last year in Sweden. Portmarnock’s Adrian Morrow was the hero on that occasion, winning the decisive point at the 21st hole in the final against Denmark.

Steven Graham (East Sussex National) and Barry Hobson (Malone) will debut for Ireland at the Europeans. Graham was able to declare for Ireland as his father hails from Cork. He competed at this year’s Irish Seniors Close in Enniscrone, where he finished third, and he was second at the Irish Seniors Open in Concra Wood. Hobson is a player in form after his runner-up finish at the Leinster Seniors Open.

The Asia-Pacific Golf Confederation (APGC) has invited two European teams to play in the APGC Junior Championship for the third consecutive year. Four European players, representing two mixed European teams, will travel to Hong Kong to compete against the best junior players from the Asia-Pacific region.

The APGC Junior Championship, now in its fourth year, will be played at Clearwater Bay Golf & Country Club, Hong Kong. Teams will play fourballs on the first day, foursomes on the second day, and singles on the third day - with the combined scores counting for each team’s total.

The European teams were selected based on finishing position in last month’s European Young Masters. Sakke Siltala, Finland, and Caitlin Whitehead, England, will make up the first European Team. Siltala claimed the silver medal in the boys’ category in Norway, losing out to a birdie on the first playoff hole against Denmark’s Sebastian Friedrichsen. In the girls’ category, Caitlin Whitehead took home the gold medal finishing on three-under-par after three days of play at Hauger Golklubb.

In the second European Team, Ulster’s Beth Coulter will join Germany’s Luc Breuer. Breuer shot the lowest score of this year’s European Young Masters, a seven-under-par 65 that featured six birdies and two eagles, helping him to a bronze medal, while Beth Coulter narrowly missed out on the podium to finish fourth.The teams will be captained by Jennifer Henderson, England Golf’s performance manager.

Two players from Ireland have been selected for Britain and Ireland to play against the continent of Europe in the Jacques Léglise Trophy. Holywood’s Tom McKibbin and Kilkenny’s Mark Power have been named in the nine-player team, which also includes the new Boys Amateur Champion, Conor Gough.

The B&I team, which will be managed for the second time by Stuart Wilson, who won The Amateur Championship in 2004, will be looking to win back the Jacques Léglise Trophy after the Continent of Europe won by 15.5-9.5 at Ballybunion in Ireland last year.

Tramore’s Robin Dawson will turn professional after next month’s Home Internationals at Conwy. Ranked seventh in the World Amateur Golf Ranking, the 22-year old plans to tee it up at the Second Stage of the European Tour Qualifying School in November.

Named in the Eisenhower Trophy team for the World Amateur Team Championships at Carton House from September 5-8th, he will also try to help Ireland win the Raymond Trophy at the Home Internationals for the fifth year running from September 12-14th.

Dawson has had an excellent season, winning the Flogas Irish Amateur Open at Royal County Down before going on to reach the final of the Amateur Championship.

He was also runner-up in the European Amateur Championship and played on the Britain and Ireland St Andrews Trophy team against the continent of Europe.

Mel Deasy from Bantry Bay collectedd his second Munster title when he won the Munster Boys Under-16 Open at Newcastlewest.

After a four way tie overnight, Deasy held a one shot lead at the turn. Two birdies on the front nine had him two ahead of Joshua McCabe. Strong winds hampered the field in the afternoon. It was a battle against the course on the back nine, although Deasy had three bogies on the back nine, it was the best return of the afternoon he dropped just one shot on the chasers. He ended up winning by one stroke, and added the Munster Boys Under-16 title to the Munster Under-15 title he won just two weeks ago.

It was a solid display of golf over the two days, where the course and the weather in Newcastlewest forced the leaders to plot their way through the par 70 course. An hour-long rain delay early this morning was followed by sunshine, but a hard south westerly wind tested everyone with the CSS two strokes higher than round one.

Six players have been selected to represent the Golfing Union of Ireland at the Italian Under-16 Boys Championship in Biella, which takes place from September 4-6th.

Keating is the current Irish Under-16 Boys champion. Byrne won the medal at the Irish Boys Amateur Open where he finished third. He was also the leading home player.

The Italian Under-16 Championship is a stroke play championship played over 72 holes. A Nations’ Trophy (36 holes) will take place concurrently with the first two rounds of stroke play. The top 40 and ties at the end of round two will progress to the final day, with the individual title decided over those remaining 36 holes.