Padraig Harrington forced to settle for second best in Prague 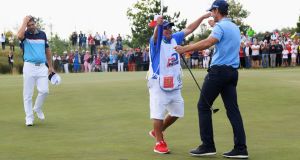 Andrea Pavan of Italy victory with his caddie on the 18th green as Padraig Harrington of Ireland looks on. Photograph: Getty Images

Pádraig Harrington has produced some blistering back nines en route to his three major wins but he had to take his cap off in acknowledgement as Italy’s Andrea Pavan came home in five-under 31 to snatch the D+D Real Czech Masters from under his nose at Albatross Golf Resort in Prague.

The Dubliner was hoping to give himself an early 47th present and put a forgettable season behind him by claiming his 16th European Tour win and his 32nd professional triumph worldwide.

But while he raced to the turn in three-under 33 to lead by three strokes from the Texas-based 29-year old on 20-under par, his lack of recent form- one top-10 and 12 missed cuts in 20 starts since he was fourth in last year’s Turkish Airline Open - proved crucial down the stretch.

Pavan had notched three top 10s already this year and he streaked past Harrington coming home, rattling in five birdies, including three in his last five holes for a five-under 67 to the Irish star’s 69 as he claimed his maiden European Tour title by two strokes on 22-under par.

“It was a good contest, no doubt about it,” Harringtons said. “I obviously don’t feel like I lost it, Andrea won it for sure. He played great coming home and holed the decisive putts. I get my fair share of wins but it wasn’t my day today.

“To shoot 20 under par on any golf course, you’ve got to put some numbers together so I’m happy with that, Andrea just finished really well. He played lovely golf all day to be honest and made those birdies. It’s a pity but I’ll settle for this most weeks.

“I’ll give myself plenty of chances to win and I know it’s a numbers game, some weeks it will be my turn for the putts to drop and the right shots at the right time.”

Pavan, whose partner is awaiting the birth of the couple’s second child, a girl, on Wednesday, was suitably chuffed.

“It’s amazing, it’s massive,” the Roman said. “I’ve won four times on the Challenge Tour but it was a long time ago. I’ll enjoy this one because it’s really hard to get and I’ll just keep working on the stuff that seems to be working and enjoy the success.”

Harrington and Pavan were tied for the lead on 17-under par heading into the final round and although the Dubliner got the head-to-head battle he craved - Malaysia’s Gavin Green finished distant three shots behind him in third - he lost the back nine battle this time.

He got off to the perfect start too, despite bunkering his opening tee shot, when he made a slick 18 footer for a birdie four and Pavan missed from close range.

He then doubled his advantage when Pavan drove into a bush at the second and maintained his two-stroke lead by getting up and down from sand for birdie at the driveable sixth and for pars at the seventh and eighth before going three ahead with a birdie from six feet at the par-five ninth.

Pavan had missed several good chances in the 10 to 15 foot range on the front nine. But he soon found his range and as Harrington’s long game showed signs of wear and tear and his putting became increasingly tentative, the Italian pounced.

He birdied the par-five 10th and 12th to cut the gap to one stroke and while Harrington produced a stellar birdie at the 200-yard 13th, almost holing his tee shot to go two strokes ahead with five holes to play, it was the Italian who produced all the fireworks.

After making a five footer at the 14th to cut the gap to one stroke, he was on terms minutes later when the Dubliner hit a wayward tee shot and made his first bogey in 48 holes and only his second of the week, pushing a five-footer wide.

Pavan then turned the screw in spectacular fashion, making a 30 footer from the fringe at the par-three 16th to go one ahead and a 12 footer for a brilliant three at the 17th after Harrington’s 18 footer lost pace at the hole.

“ Pádraig has got so much experience, such a great player and he played lovely,” added Pavan, who won €166,660 to move to 39th in the Race to Dubai. “The putt on 16 was massive. It could have easily gone both ways, he was ahead of me most of the day but after I got ahead I stayed aggressive.”

Two clear playing the 18th, he was under pressure to two-putt over a ridge from 45 feet with Harrington no more than 12 feet away after a typically gutsy approach to the back right pin.

But after lagging up to three feet left of the hole, he watched Harrington’s birdie putt catch the edge of the hole and lip out before brushing in his putt for victory.

“I don’t feel I have an issue playing against these younger guys, I feel I can certainly keep up with them and I have some good things in my own game,” the Ryder Cup vice-captain said. “Even from a week like this, you learn more when you get in contention.

“I’m seeing things about my game that I can improve and work on. I’m in a nice place, I just have to keep doing the good stuff and hopefully there’ll be more tournaments like this ahead.”