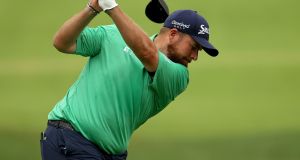 Shane Lowry is in contention after a strong first round in Georgia. File photograph: Getty Images

Matt Wallace carded eight birdies in a six-under-par 64 to claim a share of the lead after the first round of the RSM Classic.

The 30-year-old bounced back from the frustration of his closing 77 at the US Masters last weekend to set the pace at Sea Island, Georgia, alongside Colombian Camilo Villegas.

Ireland’s British Open champion Shane Lowry is three shots off the lead on three under having also played the Seaside Course. Tommy Fleetwood is also three under while Graeme McDowell and Justin Rose, who began on the Plantation Course, were two under.

Both Wallace and Villegas were playing the Seaside Course, one of two being used in the tournament along with the Plantation Course.

Wallace had to overcome late disruption to his plans after regular caddie Dave McNeilly tested positive for Covid-19.

Playing with assistance from a local caddie, he started with back-to-back birdies before dropping one of only two shots on the third. He picked up three more birdies on the front nine and another three coming home, with his only other blemish coming with a bogey at the par-four 14th.

Villegas, who played the back nine first, had six birdies in a bogey-free round.

Rory Sabbatini, who now represents Slovakia, was among a group of eight players on five under par after opening with four successive birdies.

Collated first round scores and totals (USA unless stated, par 70):