US Masters: Tiger Woods settles back into his domain as Shane Lowry struggles 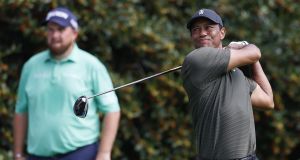 Shane Lowry watches as Tiger Woods hits his tee shot on the 15th hole during the first round of the 2020 Masters Tournament at the Augusta National Golf Club. Photo: Erik S. Lesser/EPA

For most of this strangest of years, Tiger Woods has been a shadow of himself. Whenever he has been sighted, and his appearances were few and far between, his walk has seemed laboured, the swing out of sync, the body tired and the aura of old absent.

But none of those places were Augusta National, his domain.

Shortly before his tee-time, off the 10th, a green jacketed-member given the task of putting player names into the allocated place on the board posted into the ground by the teeing complex held in his hands one possessing that of TIGER WOODS and assuredly put into the top slot.

Within minutes, Woods was off and running in his title defence. No laboured walk. His swing smooth and sweet. No tired body. Woods, his aura back. Free-flowing beauty and grace, from backswing to follow-through.

In Woods’s eight tournaments of 2020, a season in which he went AWOL for a time even after the PGA Tour’s resumption, his results have been poor. His only top-10 came in his seasonal debut back in January at the Farmers Insurance Open and his best result since the tour resumed was a tied-37th finish at the US PGA. At the start of the year, he was ranked sixth in the world. This week, he is ranked 33rd.

And, yet, why did we ever doubt him? How could we?

Something about Augusta National flips a switch in Woods. And for Shane Lowry, the British Open champion paired with him for the first time in his career, and Andy Ogletree, the US Amateur champion, the first round of this latest edition of the Masters provided them with a close-up view of Woods’s mastery.

Time after time, Woods led the way off the tee.

Another time. “Good drive,” from Lowry.

Woods was in the groove, Lowry not so much. Ogletree overcame a poor start to settle down.

But it was mainly about Woods, in a round where he played beautifully tee-to-green – finding 10 of 14 fairways, hitting 15 of 18 greens-in-regulation – and, if the putter he used 30 times had been just a tad hotter, his bogey-free opening round of 68 could even have been better.

Woods’s birdies came on the 13th, 15th, 16th and the first, where he punched the air as if to underscore what it meant to him. Having shown absolutely no form since the tour’s resumption, Woods produced much of his old magic, back in the hunt for another Major title. Of all the shots, the one on the Par 3 16th was trademark Woods, using the backstop behind the flag and letting the ball spin back to 12 inches.

In contrast, Lowry – who’d shown form in earning a top-10 in the Houston Open last week – struggled to make any impact. Lowry failed to find a single birdie and signed for a two-over-par 74 while Ogletree went one better, a 73.

Woods, though, was a man inspired. Like a magician who had pulled a rabbit from a hat, he had conjured up a round from nowhere. There was little inkling on the formline that this was coming: in his six appearances since the tour’s resumption, Woods’s results read: tied-40th, tied-37th, tied-58th, tied-51st, missed cut and tied-72nd.

Woods wasn't surprised, not at all. “I think that understanding how to play this golf course is so important. I’ve been lucky enough to have so many practice rounds throughout my career with so many past champions, and I was able to win this event early in my career and build myself up for the understanding that I’m going to come here each and every year, and the fact that this tournament is played on the same venue each and every year (helps).

“So understanding how to play it is a big factor, and it’s one of the reasons why early in my career that I saw Jack (Nicklaus) contending a lot, I saw Raymond (Floyd) contending late in his career, now Bernhard (Langer) and Freddy (Couples) always contend here late in their careers. Just understanding how to play this golf course was a big part of it,” said Woods of how the familiarity factor was always going to come into play.

He added: “I did everything well. I drove it well, hit my irons well, putted well. The only real bad shot I hit today was I think 8. I had a perfect number with a 60 degree sand wedge and I hit it on the wrong shelf. Other than that, I just did everything well.”