US Masters: Paul Casey leads the way as play is suspended 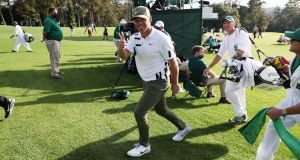 Paul Casey of England gives a thumbs up as he walks off a green during the first round of the Masters at Augusta National Golf Club. Photo: Rob Carr/Getty Images

The irony wasn’t lost on anyone. After the weather gods had their bit of fun, unleashing a thunderstorm that caused a three hour stoppage in play not long after the 84th edition of the US Masters had, some seven months later than originally scheduled, managed to get under way, the softened fairways and receptive greens led to a barrage of birdies that were played out to the sound of silence in the absence of any crowds.

Still, the players created their own noise. And while Bryson DeChambeau’s fallibility was exposed with a horrible double-bogey seven on the 13th, just his fourth hole of the round, where his drive finished in pine needles amidst the trees and his recovery plunged into a bush, it was to his credit that the recent US Open champion showed his fortitude to recover and finish two under par, with an opening 70.

Yet, such was the quality and quantity of low-scoring that DeChambeau’s efforts were only sufficient to keep him on the fringes of contention. For, in producing an exhibition of shot-making, it was Englishman Paul Casey, at 43 years of age and chasing his breakthrough Major, who set the pace. Casey’s error-free round of seven-under par 65, compiled of five birdies and an eagle, enabled him to soar to claim the clubhouse lead before fading light forced a halt to play for the day with 44 players left to complete their rounds.

Among them were Rory McIlroy, who was level par on his round through nine holes, while James Sugrue was four over through nine holes after starting on the back nine. Dustin Johnson, the world number one, was three-under on his round at the turn and opted to mark his ball on the 10th fairway after the hooter sounded to halt play. McIlroy’s approach to the 10th finished in a greenside bunker, where he will resume his round at 7am on Friday morning (12pm Irish time).

Graeme McDowell got some momentum going with a chip-in birdie on the 16th, as he signed for an opening 72 with “lots of positives to take” going into the second round, while Shane Lowry couldn’t manage a single birdie in a round of 74.

Once the early morning thunderstorms cleared, a pet day unfolded with barely a breath of wind. And, for the most part, the players made hay of the perfect scoring conditions with Larry Mize, into his 60s, showing length is not everything in the modern game. Some 33 years after his Masters win, Mize, averaging just 247 yards off the tee, quite a contrast to DeChambeau’s 334 yards average, also signed for a 70.

Casey exorcised the memories of an opening round 81 that was something of an aberration. For a player with five career top-10s at the venue, that round was out of the norm. And the 43-year-old Englishman’s beautifully crafted round _ “I played great,” he said, without a hint of modesty – enabled him to move into pole position.

“I did the right things when I needed to, and to be honest, you rarely walk off this golf course going, ‘it could have been two or three better’, but it kind of felt that way. I don’t want to be greedy. I’m very, very happy with my 65,” said Casey, with his high point coming via an eagle on the Par 5 second hole, his 11th of the round.

Casey, runner-up to Collin Morikawa at the US PGA, has found his best form in the Majors it would seem. “I’ve had nothing or very little to draw from being out playing tournament golf. The Masters, though, this week it still has a buzz to it. There’s an energy and a little bit of a vibe. Yes, it’s clearly a lot less than what we are used to, but there’s something about this place, I felt excited to be here.

“As soon as I stepped foot on property on Monday, I’ve never been so happy to pass a Covid-19 test in my life. I was genuinely nervous about that. I don’t know why I was nervous because my protocols haven’t changed. The kids were denied from going out on play dates last week. ‘Can’t go on play dates, Dad’s got to go to the Masters next week’.”

Of those who completed their rounds, Casey claimed a two-stroke lead over former US Open champion Webb Simpson and Xander Schauffele, who was among those to finish runner-up to Tiger Woods last year. Woods was among a group – which included Lee Westwood, Patrick Reed, Louis Oosthuizen and Hideki Matzuyama – on four under after rounds of 68.

“Some would say it’s the same old kind of names up there, but this golf course, to me, exposes what a guy has got. I’m not saying it’s the ultimate test. There are different types of tests of golf around the world, but this particular test you have to do certain things very, very well, and predominately the best players in the world always rise to the top this week,” said Casey, as aware as anyone that the real work lies ahead.

(USA unless stated, Par 72, Play suspended for the day due to darkness with 45 players still to finish)