Johnson and Thomas lead the way as Masters starts to bubble 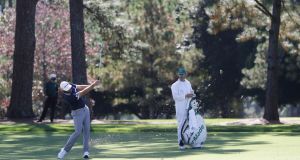 Dustom Johnson moved into a share of the clubhouse lead after his second round at Augusta. Photograph: Erik S Lesser/EPA

The cast of characters in this Masters tournament unlike any other hasn’t simply produced the usual suspects. Oh, for sure, Dustin Johnson - the world number one - and Justin Thomas, a former custodian of that position, manoeuvred their way into a share of the clubhouse lead of this disrupted 84th edition, but so too did Mexico’s Abraham Ancer and Australia’s Cameron Smith inveigle a way to join them, providing some spice to the mix.

Johnson had a second round 70; Thomas a 69; Smith a 68, and Ancer a 67. The upshot was that the quartet found themselves sharing the 36-holes clubhouse lead, of those who managed to beat the fading light, on nine-under-par midway totals of 135. Patrick Cantlay and Sung-jae Im lurked a shot further adrift, while Englishmen Danny Willett, a former winner, and Tommy Fleetwood each took route 66s to lie two shots behind on 137.

In truth, the course - still soft from the deluge of Thursday’s opening day thunderstorm, with the second round to be completed Saturday and the cut, hovering around level-par, to be decided - has yet to bare its teeth. The expectation is that the SubAir system will be ramped up, to ensure that the greens will firm up over the weekend and pose the type of questions more traditionally associated with Augusta National.

As if to demonstrate the wet nature of the course, Bryson DeChambeau was left wondering at the injustice of it all after his drive on the Par 4 third hole plunged into a swampy area never to be found. Perhaps it was the course’s revenge on DeChambeau’s pre-tournament observation that, for him, the par of the course was 67!

The soft nature of the course caused players to second guess themselves. As Thomas, defying past efforts here which have yet to see him make a top-10 finish, admitted: “It is weird, but everyone’s dealing with it. It’s not like I’m the only one that has to adjust or make or may be uncomfortable in certain situations. The entire field is dealing with the same thing.”

As Brooks Koepka, who recovered to get back into the tournament, put it: “I’ve had moments of pure stupidity.”

And Rory McIlroy was another caught out in part by the course’s soft playing nature. “You play this course so much by memory. This putt is fast. This putt is not so fast. This putt goes more than you think, all that. And you sort of have to throw all that out the window this week because the course is playing completely different. The greens are so much slower, so much softer, and because of that they can use some different pins that we’ve never seen before, either. It’s certainly a little different,” opined McIlroy of the different setup that players have discovered in its November timeslot.

McIlroy’s disjointed performance in an opening 75 was rescued with a second round 66 for 141 that ensured he would more than survive the cut. From being lost, he found a way to get back into the tournament.

As it was, a number of old masters showed that their memory banks were as alive as ever. None more so than Bernhard Langer, who became the oldest man - at 63 years of age - to make the cut, while Phil Mickelson, too, showed that imagination and creativity of shot-making remain as important as any amount of long distance driving.

And, indeed, there was a youthful hue to proceedings too as American amateur John Augenstein signed for a second round 72 for a three-under-par total of 141 at the midpoint, the same mark as Langer. While James Sugrue battled to a second round 71 for 148, which included no fewer than six birdies, in what could well prove to be his swansong as an amateur. He didn’t manage to survive the cut, but his 36-hole score was the best of any Irish amateur in the tournament’s history.

World number one Johnson’s stellar form of recent weeks and months was continued, as he moved into a share of the lead although he too had his rocky moments. A case in point came when a run of three successive birdies from the 11th to the 13th was undone by a three-putt bogey on the 14th and, then, seeing his approach to the Par 5 15th find the water in running up another.

“Before I teed off, I think I would have taken (nine-under). But obviously I feel like I played a little bit better than my position right now, but you know, I’m still happy with the way I’m swinging it, how I’m controlling the golf ball and everything I’m doing. You know, I’m rolling the putter good. Just hopefully can see a few more go in over the weekend.

“For me, I just need to play the Par 5s a little bit better over the weekend. I think that’s the only thing that I need to really do any better is just figure out how to get some better looks on the Par 5s,” said Johnson, runner-up to Tiger Woods a year ago and seeking a second career Major and first Masters.

(USA unless stated, par 72) - second round to be completed on Saturday:

1 Autumn Nations Cup - Ireland v Georgia: TV details, kick-off time, team news and more
2 Jim McGuinness: There is a way to save championship and make it competitive again
3 Sordid murder of hurling brothers still resonates in south Galway
4 Ireland’s clash against Georgia will be an important audition
5 All Blacks go back to basics to beat Pumas and snap losing streak
Real news has value SUBSCRIBE

All Blacks go back to basics to beat Pumas and snap losing streak 14:00
Big four ready to rumble on hurling’s special weekend 09:30
Jim McGuinness: There is a way to save championship and make it competitive again 09:00
Has Mike Tyson completed the least likely redemption story in American sport? 09:00
Nicky English: Waterford and Galway's task made harder by third week syndrome 08:30
Here is your handy guide to sport on television this week