US Masters: World’s best ready to do battle with eerie Augusta 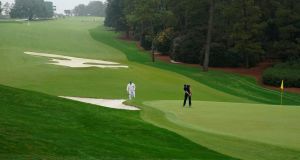 Bryson DeChambeau putts on the 10th green during a practice round. Photo: Charlie Riedel/AP Photo

For all of the science and technology, the engineering and the maths, all fundamental in modern golf’s development, whoever ultimately gets a green jacket slipped onto his shoulders as the champion of this Masters – shifted from April to November, with the whiff of thunderstorms in the air – will have done what past masters like Seve Ballesteros managed to do: found a way to conquer the course.

Indeed, it was no less a scientist than Albert Einstein who remarked, “Imagination is more important than knowledge.” And only time, the next four days of it, will reveal – in this Masters unlike any other in its history, with no ropes and no crowds and fewer azaleas – who that conqueror proves to be. Bryson? Dustin? Rahm? McIlroy? Koepka? Will be it because of power? Or putting? Or, most likely, just like Tiger Woods a year ago, because of approach play?

Let’s imagine, for the truth of the matter is that the Masters change in dates, enforced by the Covid-19 pandemic, has brought a different kind of intrigue. In bookending the Majors’ season, this unique Masters has the opportunity to provide a climax to a disrupted year, and while Bryson DeChambeau’s physical transformation has been the topic of discussion on the range and in caddie shacks with his obsession with power and clubhead speed providing statistics implying he is a game-changer, the true numbers game is in actually signing for the lowest score.

With heavy thunderstorms forecast to move into the Augusta area through the first round, and showers of a lesser severity set to linger for the rest of the tournament, conditions are expected to be difficult for the 92 players in the field, although one blessing is that the winds will, for the most part, be on the light side and not exceeding 10 miles per hour at any stage of the four days.

There are four Irish players in the field, with Rory McIlroy – again – aiming to complete the one leg of the career Grand Slam that has eluded his grasp. Shane Lowry, in upbeat form after contending for much of last week’s Houston Open, Graeme McDowell and amateur James Sugrue also have their own expectations, be it winning, top-10 or making the cut.

“I feel as in control as I have been for a while, and that adds to that relaxed feeling,” explained McIlroy of his mindset. “You know that it’s in there, it’s just a matter of going out, just getting out of my own way and just playing. Play with freedom.”

In effect, McIlroy is looking to play a bit like Johnson. The world number one has played with just such a freedom in recent weeks and months, filing six straight top-six finishes in the lead-up. “I feel like I’m playing really, really well. It’s probably the best I’ve played in my career, yeah, but it’s more consistent. I feel like there’s still a lot of room for improvement, but it’s very consistent as far as day in and day out, my shot shape, my flight and controlling my distance,” said Johnson.

That feeling of wellbeing, it would seem, is widespread. Jon Rahm, for instance, “I can’t lie, I’m feeling pretty confident,” said the Spaniard, who – not unlike DeChambeau – has identified areas where, with no spectators, he will be able to hit the ball that previously were out of play. “I think this year will be unique,” he added, “because you can maybe take advantage of where usually patrons are, like 13, you have a layup, you can go as far right as you want almost to the 14 tee and have a different angle.”

Indeed, as if to underscore potentially how many players have a chance this time, with greens likely to be softer than usual and so more receptive to approaches on the Par 5s and also the longer Par 4s, Rahm was asked to take himself out of the equation and predict who he’d like to win and who he thought would win.

“It’s hard not to say Dustin Johnson, number one in the world, he’s won a couple of times this year, he plays good everywhere. But it’s also hard not to say Rory McIlroy, who ideally has the perfect game for Augusta National. At the same time, Bryson is playing amazing golf. Phil or Tiger could simply turn up, come here and play good golf . . . . I don’t really know how to answer that, so I’m going to say myself in both those,” said Rahm.

Each and every one of them has the knowledge of what it takes to win, and some have extra power, but who has the imagination to get the job done in this Masters unlike any other?