Lee Elder finally invited to be a statesman at the Masters 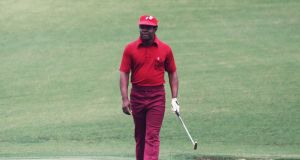 Until Lee Elder played the Masters in 1975, most of the black people at Augusta National were there working as caddies, cooks, and waiters. When Elder came up the 18th fairway at the end of his first round, those staff came out of the clubhouse to clap him home.

“The other patrons cleared the way for them to come to the front, and they were instantly recognisable by their uniforms,” Elder told Golf Digest years later. “This moved me very deeply. I couldn’t hold back the tears. One club employee shouted in this booming voice that rose above the applause: ‘Thank you for coming, Mr Elder! ’ Other employees, taking his cue, shouted the same thing.”

After Elder retired he was honoured by the city of Augusta, the Golf Writers Association of America and the USGA, but for years that round of applause was the nearest thing Augusta National ever gave to a formal acknowledgment of what he had achieved when he became the first black man to play in the Masters.

The club is so in thrall to its own history that after the old Eisenhower pine tree on the 17th fairway fell down in 2014, the former chairman, Billy Payne, memorably explained the matter was so urgent he had cut short his bone-fishing trip in the Bahamas to fly back and deal with the crisis. Elder’s achievement, though, didn’t figure. Until now.

This week, Payne’s successor, Fred Ridley, announced that Elder will be one of the three honorary starters at next year’s tournament, alongside Gary Player and Jack Nicklaus. Player has been asking the club to do something like this for Elder for a long time.

The club could, and should, have done more sooner, but then, they have never taken well to being told what to do. There were similar arguments in the 60s, when Elder and other black golfers such as Charlie Sifford were pressing ahead in the game.

In those days, the Augusta National’s byzantine qualification regulations meant they would happily invite players from overseas who had won a particular tournament one year, but wouldn’t necessarily invite US players (black or white) who had won the same tournament in another. If Elder had been born outside the US, for instance, he would have been invited to play the Masters four years earlier, when he won the Nigerian Open in 1971.

A lot of different US politicians asked the club to send Elder an invite anyway. Augusta National’s co-founder, Clifford Roberts, fended them all off. Roberts, who is still a venerated figure at Augusta, argued the club were holding black players to the same standard they did everyone else and that to do otherwise would be to diminish their achievements. So it was only when Elder won the Monsanto Open in 1974 that he made it to the Masters. “The only quarrel I have with Lee,” Roberts said, “is that he didn’t do it sooner.”

At the time Elder went along with this line of argument but said later “it felt they were deliberately working around giving a black person an invitation”. He felt Sifford should have been given one when he won the Greater Hartford Open in 1967 and when Roberts finally did invite Elder, Elder took a lot of pleasure in making him wait for his yes.

Elder was used to the prejudices. He had even learned how to use them against the people who held them. In his early days, he had made his living by hustling. “I once shot 38 playing on one leg. Another time I shot 41 playing on my knees.”

In his teens he fell in with the gambler Titanic Thompson and the pair travelled the south. Their usual routine was for Thompson to bet the men he was playing against that they couldn’t even beat his caddie. Elder would sometimes even pose as Thompson’s chauffeur and pretend he had never played golf before. They took a lot of money off a lot of wealthy men. “It was an interesting life,” Elder said, “and it trained me to handle pressure.”

Pressure like he faced in 1975. Elder was sent a lot of death threats that week. He was warned “he ought to check behind every tree” as he went around the course. He booked two houses and switched between them every night. The club went to a lot of effort to make him welcome despite it all. They made sure he was invited along to play practice rounds, provided two security guards while he was at the course, and, he thinks, made sure he was paired with sympathetic partners in the first two rounds.

The club have always insisted people have got Roberts’ racial politics all wrong, that there is doubt whether he really did say “as long as I’m alive all the golfers will be white and all the caddies black” as has been widely reported.

But there is no arguing his idea of applying “equal” qualifying standards for black and white golfers made no allowance for the huge inequalities between the two groups, or of the fact opportunities for black players like Elder had been severely limited by policies such as colour bar at the PGA, which was a “Caucasian-only” organisation until 1961.

And there is no arguing that for a long, long time, Augusta National have been backward in coming forward to fix it. It’s taken them the best part of half a century to do right by Elder. - Guardian