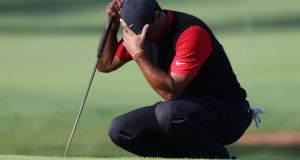 The demons that hide amongst the angelic aesthetics of “Amen Corner,” that picture postcard area that has the Par 3 12th hole at Augusta National as its menacing epicentre, have no regard for reputation.

Tiger Woods became its latest victim on Sunday, the fall guy of the most picturesque short hole on the planet.

Where his past deeds have had him immune from much of its angst, history reminds us of its destructive narrative. Last year, Francesco Molinari’s bid for a green jacket perished there. Jordan Spieth, once a favoured son, saw his hopes of a successful defence sucked into its dyed water as he ran up a ruinous quadruple bogey.

But Woods? Nah, never . . . except, never say never. For in the final round of this latest edition of the Masters, Woods - a five-time winner - ran up a 10 that was the stuff of nightmares, as time and time again he found the water, even flying a shot out of a back bunker across the green into the hazard, as if to add further ignominy to the great man’s plight.

“I committed to the wrong wind,” was Woods’s simple explanation of what had unfolded on that corner of the property. He’s watched Shane Lowry and Scottie Sheffler deal with a wind coming in off the right, but when it was his turn to stand up on the tee, the flag on the nearby 11th green was howling from the left.

“I didn’t commit to the wind, I also got ahead of it and pushed it too, because I thought the wind would come off the right and it was off the left. And that just started the problem from there . . . I hit a lot more shots and had a lot more experience there in Rae’s Creek (than ever).”

In fairness to Woods, his response was more typical of the player who through the years has walked these fairways with a sense of ownership. He recovered from his septuplet-bogey 10 with a run that saw him birdie five of the remaining six holes, including four in a row from the 15th. He signed for a final round 76 for a one-under-par total of 287, in tied 38th place.

“This sport is awfully lonely sometimes. You have to fight it. No one is going to bring you off the mound or call in a sub. You have to fight through it. That’s what makes this game so unique and so difficult mentally. We’ve all been there, unfortunately. Unfortunately, I’ve been there and you just have to turn around and figure out the next shot, and I was able to do that coming home.”

Lowry had a closer view than anyone would have wanted of Woods’s 10 (which came up three short of the record high 13 recorded by Tom Weiskopf there in 1980): “Yeah, look, he had a bit of a disaster, didn’t he? . . . But, look, this is what Augusta is like when the wind is up. I mean, he’s Tiger Woods, isn’t he? He’s the best of all time. I don’t think it matters to him whether he finishes 30th or third here, a win is all he is looking for. Like us all, he is out there giving it his best. He didn’t intend on making a 10, like none of us intend on hitting bad shots or making big numbers.”

Woods’s 10 was the highest score on a hole in his stellar professional career. How did it come about? His tee-shot came up short in Rae’s Creek and, then, after taking a penalty drop, his next shot - his third - hit the green only to spin back down the slope into the hazard. Another drop followed, and his fifth flew the green into a green side bunker. From there, he again found the water. After taking another drop, Woods got out of the bunker and two-putted for a 10.