Shane Lowry puts Masters nightmare behind him at Hilton Head 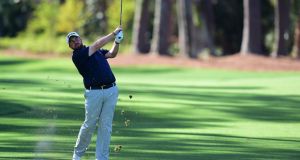 Shane Lowry of Ireland plays his third shot on the ninth hole during the first round of the RBC Heritage at Harbour Town Golf Links in Hilton Head Island, South Carolina. Photograph: Jared C Tilton/Getty Images

Shane Lowry put his Masters nightmare behind him to get among the first-round leaders at the RBC Heritage in South Carolina.

Lowry opened with a promising level-par 72 a week ago at Augusta but followed that with a seven-over 79 that included six bogeys and a double-bogey on the 10th as he crashed out of the season’s first Major .

Out among the early starters at Hilton Head, Lowry made the perfect start when he rolled in a birdie three from 20 feet on the first hole. He failed to make any gains on the par-five second but another raking birdie putt on the third hole moved the Offaly golfer to two under after three holes.

Lowry almost holed his second shot on the par-four sixth before tapping in for birdie and proved his irons were dialled in on the par-three seventh when his tee shot set up a fourth birdie of the day as he got among the early leaders on a perfect morning for golf.

Four straight pars saw Lowry slip down the leaderboard and a bogey four on the par-three saw him drop back to two under.

Spurred on by a birdie-four on the par-five 15th, Lowry finished strongly, with further birdies coming on the 16th and the 18th as he signed for a five-under 66.

That left Lowry three shots behind leader Bud Cauley, who included eight birdies on his way to a eight-under 63.

Luke Donald has an incredible record at Hilton Head without ever winning the tournament, finishing in the top three on six occasions, including a tied second behind last year’s winner, Branden Grace. The English golfer opened with a six-under 65 and was later joined on that mark by Canada’s Graham DeLaet and American Sam Saunders, a grandson of the Arnold Palmer, the inaugural winner of the event.

Donald finished in a share of third position in 2013 when Graeme McDowell secured the RBC Heritage title.

The Northern Irish golfer has work to do to get back in the mix after an opening one-over 72 that included a double-bogey on the par-three 14th, his fifth hole of the day.

McDowell made back-to-back birdies on the 16th and 17th to get back to level par only to drop a shot on the 18th to turn in one-over 36.

A birdie on the first continued the see-saw nature of his round, although he would settle down to par seven of the last eight holes, a bogey on the sixth pushing him back over par.

Elsewhere, England’s James Morrison was part of a four-way tie for the lead as the top 52 players were separated by just three shots after the opening round of the Trophee Hassan II.

Morrison carded five birdies and two bogeys on the Red Course at Royal Golf Dar Es Salam to join Denmark’s Lucas Bjerregaard and the French pair of Gregory Havret and Gary Stal on three under par.

Havret, who finished runner-up to McDowell in the 2010 US Open, said: “It’s good to play under par, anything in the red here is very good on a very tough course, so I’m happy.

“This course always plays hard and since the changes a few years ago it’s even harder. When the wind is changing it’s not easy to find the right club.

“It’s in perfect condition, the course is just in great shape and we always enjoy it here. It’s definitely a test of golf. I think it’s one of the toughest all season.”

Levy has not played since finishing fourth in Malaysia in February, but showed few ill-effects as he carded four birdies and an eagle in his 71.

Defending champion Jeunghun Wang, who missed the cut on his Masters debut last week, faces a battle to avoid another early exit after struggling to a four-over-par 77.

Paul Dunne made birdies at his closing two holes as he battled back to card a level-par 73 in his opening round, but former champion Michael Hoey has his work cut out after opening with a three-over 76.