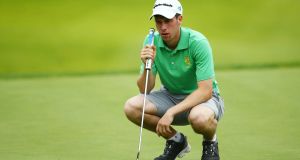 Alex Gleeson: “I was a junior member and I have been going to Rosses Point since I was very young.” Photograph: Cathal Noonan/Inpho

Five of our top eight world-ranked players might be missing but there’s a stellar field for the open amateur “major” of the domestic season with Irish Close champion Alex Gleeson fancied to put his poor record behind him and win the Radisson Blu Sligo-sponsored West of Ireland Amateur Open Championship.

The action tees off in Rosses Point today with a 138-strong field set to battle an enhanced, and more testing, County Sligo links with the top 64 after two rounds of strokeplay set to qualify for Sunday’s first matchplay round.

Gleeson, who celebrates his 23rd birthday today, is not the highest-ranked player in the field.

But as a Walker Cup panellist and long-standing member of County Sligo, the UCD and Castle star is considered one of the favourites to lift the famous old trophy and join an illustrious list of winners that includes current tour stars Rory McIlroy, Shane Lowry and Pádraig Harrington.

“I was a junior member and I have been going to Rosses Point since I was very young,” said Gleeson, who has more golf under his belt that most this year having played in six overseas events, two each in Argentina, South Africa and Spain.

“My best finish in the West is the last 32 – matchplay is always tough – so I’d love to go a few rounds this year and enjoy the buzz of Rosses Point.”

While Gleeson’s record is not a cause for great optimism having lost in the first round every year for the past five years bar a second round defeat to Dermot McElroy in 2014, his Irish Close win shows he’s a dangerous prospect.

“The field is good with a lot of guys playing well so it will be tough to win this year,” said Gleeson. “But because I’ve been a member so long and know the place so well, it’s almost like a home event.”

As a result, Gleeson will be expected to go far with Irish Amateur Open champion Colm Campbell from Warrenpoint, defending champion Jonathan Yates from Naas and his clubmate Conor O’Rourke, the St Andrews Links Trophy holder, four of the men to watch.

With the new third green in play, new tees at the fourth, 10th and 11th and strategic improvements and added bunkering at the fifth, sixth, eighth, 12th and 18th just some of the many changes carried out by Pat Ruddy in recent winters, Gleeson reckons the classic Harry Colt links plays “a shot or two harder” than before.

Local knowledge is a clear advantage and County Sligo’s Sean Flanagan – the leading qualifier for the past two years and the current North of Ireland champion – is gunning outshine fellow internationals such as Gleeson, Campbell, Tiarnan McLarnon, Colin Fairweather or John-Ross Galbraith (the highest world ranked player in the field) and become the first home winner since Cecil Ewing 67 years ago.