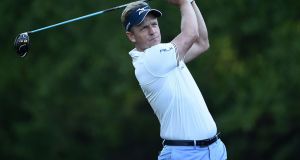 Luke Donald: “Anyone who can get to number one in the world for over a year I think has the ability to bounce back and hopefully I will.” Photograph: Stacy Revere/Getty Images)

Former world number one Luke Donald hopes to slot the final piece of the puzzle into place by claiming an overdue victory in the RBC Heritage.

The 39-year-old took a one-shot lead into the final round 12 months ago, but could only card a closing 71 as South Africa’s Branden Grace fired a 67 to claim his first PGA Tour title.

It was the third time Donald failed to convert a 54-hole lead into a win in the event, in which 29 of his last 31 rounds have been level par or better.

“I’m always excited to come here, I love this event,” the world number 96 told a pre-tournament press conference. “It’s certainly a course that suits my game.

“I’ve had a lot of success in the last eight years, I’ve done everything but win. It’s like a puzzle, this course to me. I think you really have to think your way around it very well. You certainly don’t need to overpower this golf course.

“A lot of strategy is involved and certainly it’s in the best condition I’ve ever seen it, despite the hurricane [hundreds of trees were downed by Hurricane Matthew last year]. In certain regards the thinning out of the trees has really helped the condition of the golf course.”

For the second year running he failed to qualify for the Masters and added: “I was disappointed not to be playing last week in Augusta. This last month has been kind of a strange run of events for me. I didn’t play well at Tampa, which is usually a good event for me, which was disappointing. And then I wasn’t in the Matchplay, I wasn’t in Augusta. So I added Houston, which I’ve never really played very well at.

“It’s not the greatest run up to this event that I’ve ever had, but there were certainly some weeks on the West Coast and in Florida where I was very, very encouraged about my game. I’ve certainly been working hard and hopefully coming back to a place like this where I’ve had some success I can get it going.”

Donald was delighted to see his good friend Sergio Garcia win the Masters last week and has taken encouragement from the Spaniard claiming his first Major at the 74th attempt.

“I still believe that I have the ability to win a Major and win more tournaments,” said Donald, who has played 53 Majors. “I’m not hanging up the clubs yet. I’m very committed to working hard on the game and getting past a little bit of a lull in my results the last couple of years.

“It’s certainly not been the golf that I wanted. But I’m working hard on it. And I still believe that I’m good enough. Anyone who can get to number one in the world for over a year I think has the ability to bounce back and hopefully I will.”

Eight of the top 30 in the world rankings are competing in South Carolina, including 2016 Masters champion Danny Willett and Scotland’s Russell Knox, who finished tied second with Donald last year.

Shane Lowry – after a disappointing missed cut at the Masters – will be aiming to bounce back at Hilton Head where Graeme McDowell, a winner of the tournament in 2013, will also be in action.