Out of Bounds: Golf for the many, watched by the few 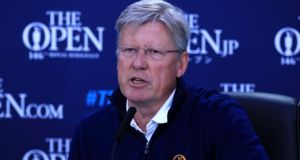 There’s something which doesn’t quite sit easily with the R&A’s stance of “growing the game,” to use that buzz phrase, and yet keeping live television coverage available only to subscription, satellite viewing.

The numbers don’t add up; and, as we know, golf is ultimately a numbers game. Winning is all about accumulating the lowest total.

And, if there was a collective intake of breath among those of us listening here at Royal Bikrdale when Martin Slumbers, the chief executive of the R&A, cited the old BBC coverage of the Open championship as “tired” and “outdated” in explaining why they had gone to Sky Sports, the fact remains that, in this case, the lower viewing figures had won out.

Let’s just remind ourselves of the live coverage viewers in the UK - and, by association, in Ireland where the BBC is freely available - for Sky’s inaugural coverage of last year’s Open compared to the years immediately before when it was on the terrestrial channel.

The peak viewership on Sky for what was one of the duels of any age came in at 1.1 million as Henrik Stenson and Phil Mickelson put on a masterclass at Royal Troon. In contrast, the live audience on the BBC in 2015 - when Zach Johnson won on a Monday finish - was 4.7 million while, in 2014, when Rory McIlroy won at Hoylake, live viewership peaked at 5.5 million.

In effect, the R&A have sacrificed a more than 75 per cent fall in live viewership in going with Sky’s subscription-only model. Sure, the point was by Slumbers, a valid one, that golf is a global sport and that deals with their US terrestrial television partners and other global networks meant that the Open was accessible to more than 600 million homes worldwide.

What seems certain is that there is no going back to the BBC, not any time soon anyway. And, ironically, it looks as if the PGA of America are going in the opposite direction: having finished its deal with Sky for exclusive coverage of the US PGA last year, word on the street is that the final Major of the season is destined to go to the BBC as soon as next month’s championship at Quail Hollow.

The PGA of America’s reasoning is that having the championship on terrestrial television - globally - and using social media outlets is a better in bringing it to a wider audience.

Such different strategies don’t add up when painting the bigger picture. However, the R&A remain happy with the BAFTA-award winning Sky coverage . . . even if the reach is a lower number. It doesn’t add up.