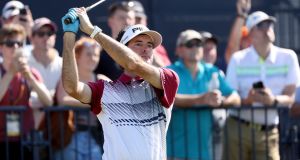 Bubba Watson of the United States hits his tee shot on the 4th hole during a practice round prior to the 146th Open Championship at Royal Birkdale. Photo: Christian Petersen/Getty Images

Two-time Masters champion Bubba Watson has virtually written off a “terrible” season as he puts his family first this year.

The 38-year-old big-hitting American has been a professional for 14 years and having won at Augusta in 2012 and 2014 he knows there are peaks and troughs to overcome.

It is why he is taking such a relaxed view of a campaign which has brought four top-10s and six missed cuts — including a first at the Masters — and resulted in his world ranking dropping from 10th at the start of the year to 49, from a career high of second in early 2015.

Four cuts in eight Open appearances with just one top-25 finish do not bode well for Royal Birkdale, which is why he is happy to focus on wife Angie and adopted children Caleb and Dakota.

“Let’s just get right to it. It’s terrible!” said Watson, whose focus on other things has even seen him throw his name into the hat to be a future Ryder Cup captain.

“There have been some highlights but what I believe has happened is life. Sometimes you get focused on something and it hurts somewhere else, right?

“The whole thing I have focused on this year is family. Do you just want to keep focusing on golf or do you focus on this?

“You are going to have years, weeks and months when you are better at one thing than you are the other one. I’m not smart enough to figure out how to do both.

“Jack Nicklaus seems like he was a phenomenal father and golfer — I haven’t figured out how to do both but it is a learning process.

‘It’s been tough but I know I am on the right path in life — and I am always going to be at the Masters, so it’s all good.“

Watson’s run without a win stretches back to back to February 2016, although he was a vice-captain when the USA beat Europe in the Ryder Cup last year which gave him a taste for leadership.

“I’ve already put my name forward but they’re not listening,” he said of his attempts to push his claims for more off-course involvement.

“I can’t tell you which year but I’ve told them everything.”

A more slimline Watson has lost 15lb on a sugar-free diet, impressive for a man who owns a candy store named Bubba’s Sweet Spot, and is very much his own man. He spent last week on a fishing trip before choosing to play nearby Formby Ladies Golf Club after his arrival in England and pulling a trolley with his own clubs on to enable caddie Ted Scott to play also.

His reputation in Europe was somewhat tainted by his appearance at the 2011 French Open, at which he played badly and did little to endear himself to the locals by referring to Paris’ notable landmarks as “that big tower”, the “building starting with an L” (the Louvre) and “this arch I drove round in a circle” (the Arc de Triomphe).

“I got a bad rap in France but it was the greatest trip. We went on a segway tour around which I now know was a palace (Versailles) — I shouldn’t have called it a castle,” said Watson at an event with sponsors G/Fore in Southport attended by former Liverpool footballers Kenny Dalglish and Alan Hansen.

“We went sightseeing but obviously I didn’t know the names of anything.

“Someone said I’d dropped a 10,000-dollar bottle of champagne but I don’t allow alcohol in my house — I might pay 10 grand for something but not for alcohol, so that story is false.

“At first I was bothered by the perception (of me). I was younger and more immature and people were writing bad stuff which wasn’t true.

“It was hurtful but that’s life. People said bad things about me in high school. I had to learn how to deal with it.”

Lacazette doubles up as Arsenal make light work of Blades 21:13
Republic of Ireland edged out by early goal in Belgium 21:45
Fabio Jakobsen returns to cycling eight months after horror crach 20:25
TV View: After a hellish rollercoaster Blackmore rides to racing’s rescue 20:29
Sixth victim dies from shooting by ex-NFL player in South Carolina home 19:31
Here is your handy guide to sport on television this week