Rory McIlroy fights back at Birkdale after horror start 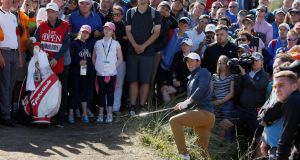 Rory McIlroy plays from the rough on the eighth hole during the first round of the British Open at Royal Birkdale, Southport. Photograph: Andrew Boyers/Reuters

As inauspicious as the opening tee-shot to this 146th British Open was, as Mark O’Meara’s grip slipped and the ball flew out-of-bounds, it only served as a spoiler alert for drama of a different kind.

If that shot beggared belief, there were many more which captivated as that early morning rain turned to deliver dry, windy conditions which enabled players to showcase their talents, or simply to grind out a score.

The showcasing was provided by the American trio of Brooks Koepka, Jordan Spieth and Matt Kuchar – the odd man out in the trio in that he has yet to win a Major – who compiled opening rounds of 65, five-under-par, that left them locked together atop the leader board. It was the first time since 2008 that three players were tied for the first round lead.

The grinding? Rory McIlroy, more than anyone, can put his hand up to lay claim to that effort. The world number four played like a hacker for the opening holes. He stood five-over-par after six holes, and lucky at that, at which point his caddie JP Fitzgerald had had enough.

“JP gave me a talking to. He reminded me of who I was, basically. He said, ‘You’re Rory McIlroy, what are you doing?’ I said, ‘yeah’ and I mumbled, ‘whatever’. But it did it, it helped. It definitely helped. It kept me positive,” recalled McIlroy, who turned his round around. One minute he was Dr Jekyll, the next he was Mr Hyde.

And McIlroy would ultimately cover the back nine in 31, the fourth birdie of that bogey-free stretch coming at the 18th for a one-over-par 71 that afterwards led him to invoke the spirit of Medinah in his bid to play catch-up.

“Because of the way I started, I actually feel really positive. It’s a bit like Ryder Cup at Medinah in 2012. We’re 10-6 down on Saturday night but we feel like we were right in with a chance, because we won the last two points. It’s sort of like that. Even though there’s a lot of golf left, in other circumstances it might have been a disappointing day. But just with the way I finished, I feel really good about it,” claimed McIlroy.

The reality is that McIlroy has a lot more work to do if he is to get back into the business end of matters. No fewer than 39 players signed for sub-par scores and, although world number one Dustin Johnson was another to struggle, like McIlroy also signing for a 71, the quality at the head of affairs comprises young guns who know no fear and a man often tagged among those players as the best-never-to-have-won-a-Major.

Kuchar’s round was impressive, especially a front nine that saw him take just 29 strokes. His game cooled off thereafter, as putts that had dropped on the outward journey refused to give a satisfying plop sound into tin cups. Still and all, in Faldo-esque fashion, he put together a sequence of nine straight pars on that back nine.

“I know I’ve been around a while, but I also feel like I’m in about the prime of my golfing career. I feel like I certainly have as good a chance as anybody,” said Kuchar, at 39, the elder of the leading  trio by some margin.

The difference is that Spieth, 23, and more recently Koepka, 27, know how to close the deal in Majors.

Koepka’s win in last month’s US Open extended the sequence of breakthrough Major champions to seven, dating back to Jason Day’s win in the 2015 US PGA. And, although he hadn’t played competitively since Erin Hills, Koepka showed he’d lost none of that sharpness or any of that hunger.

On the Par 5 17th hole, Koepka’s approach ploughed into a greenside bunker. “It was actually a terrible lie in the bunker, it was in one of those rake marks. And my caddie [Ricky Elliott] told me to get inside 10 feet would be pretty good.” He did better than that, holing out from the trap for an eagle.

As it happened, Spieth too showed his bunker wizardry coming in. In his case, it came on the Par 4 16th where his ball crept into a greenside sand trap and also fell into a rake mark.

“I was on the downslope of one of those where I knew I couldn’t catch any spin, and with a shot that you had to get up quickly. And then if it got running at all, it could go off the green the other side and be in the downslope of the next bunker. I could have played hockey there,” said Spieth.

But Spieth played the shot beautifully, with high velocity, hitting out to eight feet and holing the par putt.

They all have eyes on the trophy, not least Kuchar, the odd man out in the mix. “Regardless of your age, if you’re in this field you have a dream to win the title. I think you go down this entire list of players, I think everyone thinks, ‘if I put the week together, it could be me at the end of the week holding the trophy’,” said Kuchar.

He hit the nail on the head. It’s all to play for.