‘I didn’t know if I’d ever be good enough to win something like this,’ says humble champion 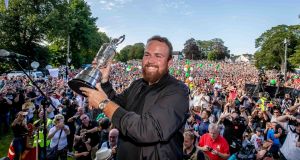 As thousands thronged the centre of Clara in Offaly on Tuesday awaiting the triumphant homecoming of British Open winner Shane Lowry, his relatives and friends in the know gathered outside Christy Cowen’s pub on the edge of town.

This was to be his first stop, before a march through the streets to the local green for a ceremony.

The golfer’s uncle, former All-Ireland football winner Sean Lowry, stood in the glorious evening sunshine outside the pub, which is owned by the family of former taoiseach, Brian Cowen.

“Shane has magic in his hands,” smiled the GAA great, as he reflected on the now famous victory last week of his nephew, known for having one of the best short games in golf.

Joe Lowry, another uncle, stood nearby. He has a theory about why his putting and chipping is so good: “There’s no driving range in Esker Hills (Lowry’s home club). So when he was a kid, he just kept practising on the greens.”

Led by the band, Lowry had to virtually fight his way through the crowds to get to the green, occasionally pausing to hold the jug aloft to cheers

Sean and Joe hadn’t planned to travel to Royal Portrush in Antrim last week to watch Shane play in a historic major tournament on Irish soil. But by Saturday night, he was four shots in the lead heading into the final round and they had a choice to make.

“It was just one of those things in life. I knew I had to go,” said Sean. He called Joe and arranged to pick him up in Clara at 6.40am the following morning. They drove to Antrim and witnessed their brother’s son create golfing history.

Lowry was due back in his hometown at 6pm on Tuesday with the “Clara Jug”, as the famous old trophy appears to have been renamed. Ahead of his expected arrival, the back of a truck was set up as a stage at the green on the same spot where Cowen sank a pint of Guinness upon becoming taoiseach in 2008. Offaly fetes her famous sons.

Local businesses, from Mace to Yummy House Chinese takeaway, put out welcome posters. “Welcome to Lowry town,” said one. A street trader selling green and gold Offaly headbands loitered. The Clara Town Band marched through the streets. The event began to feel like a street festival.

At 6.30pm, the hero arrived outside Cowen’s to a thunderous roar. Bearing the famous old claret jug and the widest of smiles, he emerged from a minibus along with his parents, Brendan and Bridget, his wife Wendy Honner, and other family and friends.

Led by the band, Lowry had to virtually fight his way through the crowds to get to the green, occasionally pausing to hold the jug aloft to cheers. The loudest ovation came from the crowd outside Baggots pub, where he was due to quench his thirst later.

Onstage, he was greeted by local politicians, the musican Mundy, comedian and impressionist Conor Moore, and RTE sports broadcaster, Des Cahill. Lowry, now comfortable in his skin as a major winner, didn’t stop smiling for a second.

Filled with pride, he looked out to the crowd on the green, which now stretched in the evening sun all the way back to the top of the natural amphitheatre.

“I didn’t know if I’d ever be good enough to win something like this,” said the humble champion. The crowd cheered their appreciation. They knew.

1 Monica Seles: The warrior queen who could have been the best ever
2 Valtteri Bottas takes Austrian Grand Prix as Lewis Hamilton is demoted to fourth
3 Donnacha O’Brien takes first Classic as Fancy Blue wins French Oaks
4 Enable can’t reel in impressive Ghaiyyath at Sandown
5 Ferrari’s Charles Leclerc ‘will not take the knee’ before Austria GP
Real news has value SUBSCRIBE