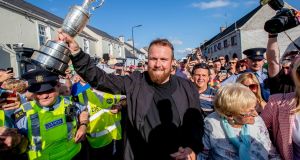 Shane Lowry with the Claret Jug and his grandmother Emily Scanlon during his homecoming to Offaly after winning the British Open at Portrush. Photo: Morgan Treacy/Inpho

“Absolutely,” is the reply from Shane Lowry when asked if he’d carry the Irish flag at the Olympics opening ceremony in Tokyo next year.

Lowry’s win in the British Open has jumped him to 10th in the updated Olympic men’s qualifying rankings. “It will be incredible, won’t it? I missed the last one (in Rio de Janeiro in 2016). I got a lot of stick for that. I had my own reasons. This (win) has gone a long way to putting me on the plane for Japan. ”

Those Olympic qualifying rankings started on July 1st 2018 and finish on 22nd June 2020 and Lowry is very much on course to accompany Rory McIlroy, currently fourth in the table, in the men’s competition. The top-60 players off the qualifying rankings make it to Tokyo.

“I’ve very excited (about going). We’ll be going over the week after the Open next year (at Royal St Geroge’s) for the opening ceremony, so to be around at that will be pretty cool. Hopefully I can go there. Wins are hard to come by, but hopefully I can bring a medal home.”

Lowry, 32, missed the last Games in Rio because of concerns about the zika virus at a time when his wife, Wendy, was expecting their first child.

While the Olympics is one of his goals for next season, Lowry again reaffirmed how much he is aiming to make the Europe team for the defence of the Ryder Cup at Whistling Straits in Wisconsin next September when the team is captained by Pádraig Harrington.

“I just want to play in the Ryder Cup. I’ve watched the last couple, had a chance to make the team a few years ago (in 2016) and I didn’t and I was very jealous, envious even of the guys playing. I just want to experience it. I’m ambitious and I don’t want to miss out on it. I want to see what its like and obviously next year, with Paddy as captain, would be great.

“ I definitely wouldn’t be scared of playing anyone. I’d obviously love the opportunity to play Ryder Cup but there’s a long way to go for that and I really need to focus on that a lot over the next 12 months and then I’ll plan my schedule accordingly and see where it leaves me.”

And, with one Major title on his CV, Lowry – who returns to competition in a fortnight’s time in the first of the three FedEx Cup playoffs before turning to the European Tour for September’s start of the Ryder Cup qualifying campaign – is not content to sit still on his career path.

“I am a very ambitious person so I am obviously going to want to do bigger things in the game. There are not many going got me many things that come bigger things than Sunday. The way I won and how I did it and where I won, I think it was incredible. And if you were to write down all the tournaments that I am going to play over my whole career that you’d want to win, and you were to pick one, that would be very near the top of the list. It would be in the top two. So to be able to win that tournament, I actually feel quite lucky that I got the chance and I was able to do it when I did it,” he said.

1 UK Sport to investigate ‘deeply troubling’ allegations of abuse in gymnastics
2 Tipping Point: DeChambeau’s transformation raises questions, but who will ask them?
3 Tuilagi case shows England’s home-based clause is out of date
4 The Game Changers: Vincent O’Brien, a pioneer who took Irish racing to the world
5 Cam Newton broke the mould: Can his flame be rekindled at the Patriots?
Real news has value SUBSCRIBE

Clubs can now report prohibited county training directly to GAA 18:58
Women’s British Open to go ahead but without fans 17:16
UK Sport to investigate ‘deeply troubling’ allegations of abuse in gymnastics 18:04
Tuilagi case shows England’s home-based clause is out of date 16:48
Cam Newton broke the mould: Can his flame be rekindled at the Patriots? 12:12
Here is your handy guide to sport on television this week