‘I don’t have enough time to take it all in. You’d love to be allowed stand there forever’ 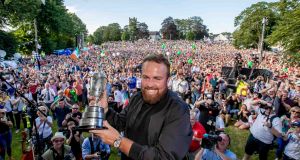 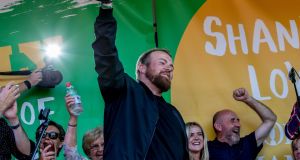 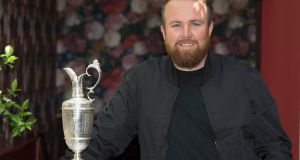 Shane Lowry with the claret jug, at a press conference in Dublin prior to the official homecoming reception in his home town of Clara.Photograph: Dave Meehan 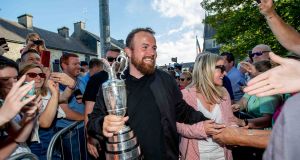 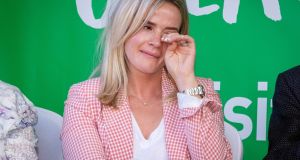 Journeying from all corners of the country, proud visitors said they could not miss the “once in a lifetime” opportunity to join in the party with the man of the hour.

Having trailed Lowry around the Royal Portrush golf course in Co Antrim, Tom Cunningham (70) decided to follow him to the celebratory event as well.

“You couldn’t buy the atmosphere in Portrush on the weekend,” said Mr Cunningham, who said he was hoping for a similar high in Clara.

“I can’t explain it to anyone who wasn’t there. It was just unbelievable. It was like Carlow winning the All Ireland – if that were possible.”

Mr Cunningham, from Rathvilly in Co Carlow, took the train from his home county early on Tuesday afternoon – with fold-up-stool in hand – in time to grab a prime spot on Clara Green, where the sports star was to address the crowds.

Peter Harding (32), Rebecca Cleere (27) and Martin Gaffney (28) travelled up from Kilkenny on Monday afternoon, staying overnight in their camper van.

While they are not big golf fans they decided to come up “on a whim for the craic,” said Ms Cleere, a secondary school teacher.

“We got roped into getting the event ready,” she added. The group of friends were enjoying their drinks in Baggot’s Back Door pub when they found themselves carrying four portaloos into the beer garden. Their hard work was rewarded with a free drink, Ms Cleere assured.

Before making the journey Mr Harding said he sent Lowry a message on Instagram to see if there would be celebrations in the town.

“I didn’t care if he was here or not. I just wanted to know if there was a session going on,” he said, adding: “I wasn’t disappointed at all.”

“We came here because Shane Lowry is so relatable,” said Mr Gaffney, adding that the champion golfer’s aunts had knocked on the door of their caravan on Tuesday morning to see if they wanted breakfast. “That’s how relatable they all are.”

Mr Gaffney couldn’t envisage putting in such effort for another golfer, but said: “When he wins the Masters in April we will be back up.”

Settled on their camping chairs on the green from early afternoon, the Kelly family from neighbouring town Tullamore, said they are “very proud Offaly people” following the golfer’s win.

“We are delighted for Shane. He is a lovely fellow,” said Seanchail Kelly (54), who was draped in county and country flags.

“If Ireland won the World Cup in soccer it would be huge, but this is probably bigger because it is a personal achievement,” said Mr Kelly. “It was just phenomenal the way he played.”

The win is very special because the golfer is loved by all in the county.

“He is very proud of being an Offaly man. He will never forget his people,” said Mr Kelly.

Once in a lifetime

The Shanaghy brothers arrived into Clara on Monday morning, travelling from Ballyhaunis, Co Mayo, and Faithlegg, Co Waterford, to join in the “once in a lifetime” party, said Noel Shanaghy (70).

“It’s just brilliant. Everybody is so friendly and welcoming. We met the family and they just couldn’t be nicer,” said Mr Shanaghy, who is a casual golfer. “I’m not in the same league as Shane now,” he was quick to point out.

“If we were sitting at home looking at this we would regret not coming,” Mr Shanaghy added. “Now that we are here it’s all worth it. The atmosphere is fantastic and everyone is in such good humour.”

On Tuesday afternoon, Lowry’s sister, Sinéad Flanagan, said she was “incredibly proud” of her brother and couldn’t wait to welcome him home.

The town of Clara has put in an “incredible” amount of effort to organise the occasion in just 24 hours, she said. “I’d say there were a lot of people working hard into the night.”

While the champion golfer had already seen success at the Irish Open, Ms Flanagan said the weekend’s victory was the “step up” that would change her brother’s career forever.

“This is life-changing for Shane,” she said. “The two biggest things you can win in golf are the Ryder Cup and a Major. He has done one, so hopefully next, with his ambition, is the Ryder Cup.”

“Shane won’t change and never will change,” she said, adding that the people in Clara will always be happy to have a drink with their village champion.

Right man for the job

Earlier Lowry told a press conference in Dublin earlier  his caddie was the “right man for the job” .

Mr Lowry and Brian ‘Bo’ Martin have been working together for nearly a year. “He’ll definitely get another few months out of me anyway,” laughed Lowry .

“He’s been a great influence on my golf over the last year I think the job he did on Sunday was unbelievable when I look back at it,” Lowry told The Irish Times.

“He was on me all day, he just kept me focused on the job at hand and I know now that when I’m in that situation again that he’s the right man for the job.”

Lowry said he hasn’t had a chance to let the last 48 hours sink in. “I said to Bo, walking down the 18th on Sunday, I said ‘I cannot believe this is me. I just cannot believe it.”

“I don’t have enough time to take it all in. You’d love to be allowed stand there forever.”

Lowry’s two-year-old daughter, Iris, was not joining them at the homecoming in Clara.

“We’ve got some great pictures from the weekend, it’ll be something that we can show her over the coming years. It was very special to have her around.”

Having seen his parents and immediate family since his win in Portrush, Lowry is now looking forward to showing his grandmother, Emily Scanlon, the Claret Jug trophy.

“I’m looking forward to bringing that into her and throwing it down on the kitchen table,” he said. “Just to be able to sit there and chat to her and show her the trophy is just going to be incredible.”

“There’s names from the 1800s hundreds on that. It’s unbelievable that it’s in my house and my names on it and my name’s going to be there forever and that can never be taken away from me,” he said.

“Who ever thought there’d be an Open champion going home to Clara. It’s incredible.”

Although he’s taking some time to spend with his family now, Lowry has one eye on the future. He spoke of his hopes to make the Ryder Cup and 2020 Olympics teams. “I obviously missed the last one [Olympic Games] — I got a lot of stick for that but I have my own reasons and I’m very excited. I think this has put me a long way to being on the team and on the plane to Japan.”

“Medals are hard to come by but I hopefully I can go there and maybe bring a medal home as well,” said Mr Lowry.

After not making the team for the last Ryder Cup, Lowry said he was very envious of the players who did. “I just want to experience it,” he said. “I’m ambitious, and I don’t want to miss out on it. I want to see what it’s like.”