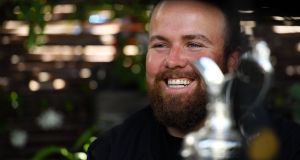 Iris Lowry is two-years-old and won’t really know yet the role she, or her favourite song, played in daddy Shane’s Claret Jug win.

Who knows, in time Iris might even cringe when she hears that ‘Baby Shark’ was the tune of choice each day on the drive to the course at Royal Portrush and that it remained in Lowry’s head as he worked his way around the links each day of the 148th British Open, which earned the Offalyman a breakthrough Major title.

“I swear to God that’s true,” said Lowry of playing the song in the Mercedes car each day en route to the course, “to keep Iris quiet.”

Whatever about the song choice, there’s little doubt that Lowry kept a rhythm for four rounds that saw him scale the heights as Champion Golfer of the Year and opens up a string of possibilities going forward on both the PGA Tour and the European Tour.

Having opted out of this week’s WGC-St Jude Invitational in Memphis, Lowry will return to the United States next month for the three FedEx playoff tournaments – the Northern Trust in New Jersey, the BMW Championship outside Chicago, and the Tour Championship in Atlanta. However, he doesn’t plan on getting back to practice until next week, as he celebrates his great win in Portrush.

The Claret Jug will forever more have a pride of place in his home, but it is not only the famous names engraved on the base – among them Jack Nicklaus, Tiger Woods and four other Irish players starting with Fred Daly, then Pádraig Harrington, Darren Clarke and Rory McIlroy – which have intrigued him since laying claim to it but also those who never lay claim to the piece of silveware.

“It’s a lonely place out there when you’re not going well and I’ve had a couple of bad Sundays in Majors and one particularly bad one (at the US Open at Oakmont in 2016). I was going out there on Sunday just hoping it wasn’t going to happen to me that day. I was hoping I was going out there and be able to man up and win the tournament. So I’m obviously quite happy that I was able to because it would have been quite difficult if I didn’t win on Sunday, you know, going out with another four-shot lead.

“The weather was (so bad), it could have gone pear-shaped easily enough. I mean the putt on that first hole, I think people underestimate how difficult that putt was. The whole scenario, that two minutes on the first green, Tommy missing his and me holing mine. He holes, I miss, there’s only one in it and suddenly I’m starting to think about all sorts.”

Lowry, for sure, did get the job done; and magnificently so too. And although the past few days have been something of a whirlwind, since hitting the road out of Portrush shortly before half-nine on Sunday night and then getting the mother and father of all parties under way in 37 Dawson St which has extended to a variety of watering holes around the capital in the past couple of days.

Speaking at a media event in House on Leeson Street, Lowry added: “ I literally haven’t stopped going since I got off the 18th green on Sunday. I think when it comes to the end of the week that’s when I’ll start to actually process what’s happened and start to look forward to what I’m going to play in for the rest of the year and set out some goals for next year. Right now I’m just trying to enjoy the moment. For this to happen to me, I just feel quite lucky. I’m looking forward to the next couple of days and then I’m looking forward to just being able to relax when it’s all over as well.

“I can’t stop looking at my name on it. There are names on there from the 1800s. It’s such an iconic piece of silverware and I can’t believe that it’s in my house and it will be forever. That can never be taken away for me.”