It doesn’t matter whether Europe or the USA wins, it only matters that it’s a close battle 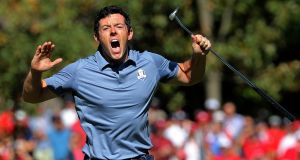 It’s still a good week and a half away but already you can feel the unmistakable rumble of the Ryder Cup nonsense machine kicking up in the distance. A group of gentlemen calling themselves the Ryder Cup Guardians have been gathering in London to come up with songs to sing, terrace-chant style, at Le Golf National just outside Paris on Friday week onwards. The first of them dropped on Twitter near the end of last week, an ode to English rookie Tyrrell Hatton.

(To the tune of The Sun Has Got Its Hat On)

Seriously, if that’s not justification for playing the whole thing behind closed doors, it’s hard to imagine what could beat it. Thomas Bjorn took some heat a couple of weeks back for going with Sergio Garcia as his fourth captain’s pick but suddenly it all makes sense. He couldn’t risk throwing in another rookie like Matt Wallace, not because he might wilt under the pressure of the actual golf, more to spare us all the embarrassment of whatever William Wallace/Wonder Wallace/Wallace and Gromit ditty the self-styled Guardians would have come up with for the occasion.

There might not be a more fundamentally misunderstood event in world sport than the Ryder Cup. Not by players, who routinely brush off its importance only to go weak at the knees as they peg their ball on the first tee on Friday morning. Not by fans, who gin up a raucous us versus them atmosphere on both sides of the Atlantic even though the result won’t stay with them for the duration of the journey home. Not by the media, who mine every syllable in the build-up for anything vaguely controversial, as though it was a prize-fight between two past-it pugs short on publicity.

Remember Danny Willett’s brother? Two years ago, in this very week, Pete Willett wrote a piece for the never-mentioned-before-or-since National Club Golfer magazine in which he described American golf fans as, “pudgy, basement-dwelling irritants, stuffed on cookie dough and pissy beer, pausing between mouthfuls of hotdog so they can scream ‘Baba booey’ until their jelly faces turn red”.

And boy, did the walls come tumbling down. It didn’t matter that (a) it was a joke, (b) he wasn’t a million miles off the mark, as evidence by one crowd member at Hazeltine shouting “Hey Rory, go suck a d**k!” into Rory McIlroy’s face that weekend or (c) he wasn’t Danny Willett. No, just like that, the worst kind of Ryder Cup eejitry took over.

The usual po-faced, readily-horrified golf machine clanked into gear immediately. European captain Darren Clarke’s move was to drop Willett from the opening morning’s foursomes, ostensibly for his own protection, which even in the heat of the moment looked like an insane over-reaction. The option of laughing it off never seemed to occur to anyone.

Willett went on to have a dire weekend, losing all three matches he played in. Asked during the Sunday night press conference to sum up his first Ryder Cup, he replied, “Shit.” As the room fell around in fits of laughter, the then Masters champion warmed to his theme. “Sorry, would you like me to elaborate? Really shit.”

Here’s the thing everyone forgets about the Ryder Cup. It doesn’t matter, except when it matters – and then it really matters. For all the guff that goes with it, all the anticipation and coverage and everything else, it’s actually one of the most expendable sporting events on the calendar. Outside of those involved, nobody’s day is made or ruined by the result.

The Ryder Cup Guardian lads, those blue and yellow Bananaman impersonators who are currently licking the top of the pencils and trying to come up with something that rhymes with Thorbjorn Olesen, surely know this too. In every other sport, your team losing a big event takes something out of you. It’s something you feel personally. Whether or not you have any right to is a different issue – the bald truth of it is that you do. That’s why it matters.

The Ryder Cup is different. It only matters when it’s close. In a way, it’s actually more pure for it, counter-intuitive as that sounds when talking about such a nakedly cash-grabbing enterprise. Each iteration lives and dies simply by how competitive it is. All the Euro v Yank stuff is a mile wide and an inch deep – it’s the Ryder Cup’s ability to generate suspense and drama that sustains it.

Put it this way. If your team is strolling to a handy win in a final in rugby, soccer, hurling, baseball or whatever else, you’ll watch it all and savour every minute. If Europe are running away with things in Paris by mid-afternoon on Sunday week, you’ll idly flick around to see what else is on. There’s just no emotional pull involved.

But the actual sport of it is a different story. It has the capacity to drag you in and manacle you to your seat in a way other events can only dream of. When you strip out all the nonsense, a closely-fought Ryder Cup is one of the great spectacles of world sport. Every swing of the club is a piece of theatre in itself, from those collywobble tee-shots piercing the dawn on Friday morning to the last putt given (or not) on Sunday afternoon. All the noise around it does it a massive disservice.

Because the Ryder Cup doesn’t need brainless songs or manufactured rows or any of the attendant silliness that apparently has to follow it around. All it needs is for the teams to be close on Sunday afternoon, for three-footers to feel like 10-footers, for a holed bunker shot to beat a stitched approach, for a player down dormie three to eke out a half-point and for it all to come down to the last couple of matches left on the course.