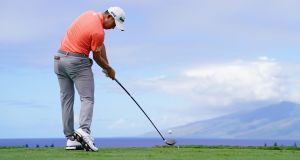 Collin Morikawa has made every cut in his professional career since his debut at the Canadian Open. Photograph: Cliff Hawkins/Getty Images

Where once upon a time there was a fear factor in whippersnappers stepping out onto the big stage, there’s a tsunami of young talent emerging onto the professional golf tours around the world with a steely coldness that belies their years and an air of intent.

So, who to watch out for in 2020? The list is potentially a long one to be honest, but here’s five young guns to keep an eye on as the golfing year really gets going with a bang this week with tournaments in Hong Kong, South Africa and Hawaii:

Collin Morikawa: this 22-year-old American can’t be accused of being star struck in any way since making his professional debut in the Canadian Open - won by Rory McIlroy - where he finished tied-14th. Thing is, Morikawa has made every cut in his professional career since that debut and, more tellingly, also secured a breakthrough PGA Tour win when lifting the Barracuda Championship in just his sixth start as a professional. He was ranked 1,039th in the world on his pro debut in Canada and has moved up to a current 55th in the official world rankings.

Jazz Wattananond: ask him about his name, and he’ll tell you it’s because his father liked jazz music. The 24-year-old is no newcomer to the professional game having turned pro at the tender age of 16 but he now looks ready for a big year globally. The Thai golfer won four times on the Asian Tour in 2019 - including the closing two tournaments, the Thailand Open and the Indonesian Masters - to top that order of merit. Up to a career-high 40th in the latest world rankings, he’s set to bring his game to the bigger stages on the PGA Tour and to the Majors.

Rasmus Hojgaard: it was less than two years ago that Rasmus - and identical twin Nicolai - were part of a Denmark team which conquered the world to claim the Eisenhower Trophy at Carton House. Now, the 18-year-old is making waves on the PGA European Tour and looks like one of the more exceptional talents to have emerged in recent years. Having cut his teeth on the Challenge Tour in 2019, Hojgaard won the Mauritius Open in just his second start on the European Tour and carries a self-confidence that marks him out as a special talent.

Guido Migliozzi: the Italian let us know of his potential in a rookie season on the European Tour in 2019 where he finished 40th on the order of merit, a season highlighted by two wins - in the Kenya Open and the Belgian Knockout - and looks set to kick-on in 2020. The 22-year-old (he’ll turn 23 later this month) is battle-hardened, having played on the Alps Tour after turning professional (where he was a three-time winner) and then the Challenge Tour. Currently ranked 107th in the world, expect further upward trending in 2020.

Joohyung Kim: a bit of an outlier, this 17-year-old Korean has yet to make the big stage but he is definitely one to watch out for. Already a winner on the Asian Tour - winning last year’s Panasonic Open India - this Korean-born teenager has lived in Australia, Philippines and more recently Thailand in following his golfing dream. That travel-hopping has been with the plan to one day make it onto the PGA Tour and he is heading in the right direction and has negotiated his way up to 158th in the world rankings.