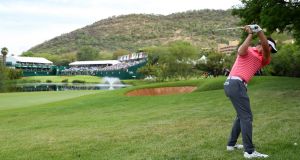 Scotland’s Scott Jamieson hits his second shot on the 18th hole during the third round of the Nedbank Golf Challenge at Gary Player CC in Sun City, South Africa. Photograph: Warren Little/Getty Images

Scott Jamieson will go in search of the biggest title of his career when he takes a one-shot lead into the final round of the Nedbank Golf Challenge hosted by Gary Player in South Africa on Sunday.

The Scotsman won the weather-shortened Nelson Mandela Championship in the 2013 European Tour season but taking home a cheque for just over €1 million and a first Rolex Series trophy in Sun City would dwarf that achievement and boost his chances of making Thomas Bjorn’s Ryder Cup team next year.

A bogey-free 67 moved the 33-year-old to eight under and a narrow advantage over France’s Victor Dubuisson, who signed for a 71 after holding a two-shot overnight lead.

Shane Lowry failed to make a move on Saturday after a level-par third round of 72 kept him on one under for the tournament and seven off the lead. Pádraig Harrington shot a one-under 71 and is one over for the tournament while Paul Dunne is seven over after carding a 73.

Jamieson was a picture of consistency as he made birdies on the second, fourth, ninth, 13th and 14th.

“It’s exciting,” he told the European Tour’s official website. “I’m in a good position, tomorrow will be a new challenge. Still an awful long way to go but if I can obviously do what I did today, I’ll be in with a good shout.

“It would be the biggest moment of my career, I’ll be well aware of that tomorrow. I’ve got to see if I can step up to the challenge.”

Two-time Major championship winner Martin Kaymer was at five under alongside home favourite Branden Grace, with another South African in Haydn Porteous and Italian Francesco Molinari two shots further back.

Englishman Tommy Fleetwood would take the Race to Dubai title with a win on Sunday but he was six shots off the lead after a third-round 67.

Rangers get the party started with title in touching distance 17:31
Southampton send Sheffield United further into the mire 17:25
Gordon Elliott confirms Denise Foster will take over licence 16:42
Mícheál Naughton appointed president of the LGFA 16:32
Burnley hold on for a point to leave Arsenal stuck in 10th 14:54
Here is your handy guide to sport on television this week