Meanwhile, Ireland’s Gavin Moynihan has his sights firmly set on the European Tour 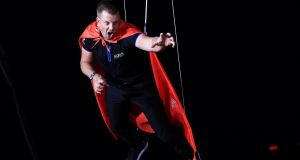 Henrik Stenson injured his rib during this publicity stunt ahead of the WGC - HSBC Champions in Shanghai, China. Photo: Andrew Redington/Getty Images

Gimmicks are becoming increasingly evident on the tour circuit, the latest being the manner in which a man on a hoverboard travelled the entire distance of the 18th hole at Regnum Carya to deliver the Turkish Airlines Open trophy to Justin Rose on the green at the prize ceremony.

But at least the guy on the airborne board was a professional!

Poor Henrik Stenson is paying a heavy price – and a sore one presumably – for someone’s bright idea to get him dressed up as Superman and hoisted into the air in a publicity stunt ahead of the recent HSBC Champions tournament, where he finished runner-up to Rose. In the stunt Stenson was hoisted above defending champion Hideki Matsuyama who guarded the trophy on the ground below.

However it seems that the Swede subsequently developed a rib injury which badly hampered him throughout the tournament in Turkey and has now placed a question mark over his participation in the European Tour’s final two events, this week’s Nedbank Challenge and next week’s season-ending DP World Tour Championship in Dubai.

“It’s not been good and obviously I haven’t been able to do myself justice in terms of the golf,” admitted Stenson, who has withdrawn from the Nedbank and will make a decision later in the week on playing in Dubai. One beneficiary of Stenson’s withdrawal from the event in Sun City was Andres Romero, who was drafted in as his replacement in the limited-field tournament.

Moynihan has European Tour in his sights

ISM chief Chubby Chandler was hugely impressed with how one of his young up-and-coming players put out a thank you note on social media for all those who had helped him throughout the season.

“Nobody told or asked him to do that, it was all himself . . . . and I think that’s class and a sign of what a great young man he is,” said Chandler.

Moynihan’s note explained after narrowly failing to earn a full tour card on the main circuit following the Road to Oman finale: “Not the week I was hoping for but great year on the Challenge Tour. Finished 19th on the rankings. Starting the year with no category on any tour is big move in the right direction. Still some parts to my game that need improving but had had an enjoyable year on the course. Guaranteed about 10-12 events on main tour next year.

It’s ain’t fully over just yet for the Dubliner: Moynihan heads to final qualifying school in Tarragona later this week where he has a second bite at the cherry in his bid to claim a full tour card.

“It’s been 20 years of hard graft, hard work and I’ve achieved a lot. I’ve achieved a Major championship. I’ve won Olympic Gold. I’ve won a lot of other tournaments. I’ve had some great moments. To kind of try to do all of that again from a fresh, clean slate, that would be a daunting task” – Justin Rose on being asked if he’d like to be starting out all over again on tour.

“My caddie told me, ‘This week, you’re going to be first. Two weeks ago, you finished third. Last week, you finished second, so you know what comes after that . . . .first.’ I was like, OK, let’s go for it,” – Shanshan Feng on successfully defending her TOTO Japan Classic title on the LPGA Tour.

4/10: Tommy Fleetwood’s task of retaining his lead at the top of the Race to Dubai rankings is made a tad easier with the fact that no fewer than four players currently inside the top 10 on the order of merit are bypassing this week’s megabucks Nedbank Challenge in Sun City. Indeed, Fleetwood’s nearest challengers – Justin Rose (2nd), Sergio Garcia (3rd) and Jon Rahm (4th) – are all absent from the $7.5 million tournament. The fourth player from the top-10 missing from the field is, of course, 10th placed Rory McIlroy who is on an extended break in his effort to recover from the rib injury which hampered his season.

“So happy for @JustinRose99 ! Two wins in a row. A WGC and a Rolex series event” – singer Niall Horan lets his 36 million Twitter followers know how happy he is for his pal.

“There was a 60 yard flag and green on the range. I must have hit that shot a hundred times in practice this week” – Pádraig Harrington on holing out with that lob wedge during the final round of the Turkish Airlines Open.

“So pumped for Patrick. Such a stud and will win a lot on @PGATour See you in Maui brother!!” – US PGA champion Justin Thomas tips the cap – in twentysomething kind of speak – to breakthrough tour winner Patrick Cantlay, who has earned a ticket to the Tournament of Champions in January.

Q: In a stroke play event, a competitor’s marker leaves the course at the end of the round and takes the competitor’s score card with him. What should the committee do?

A: The committee should make every reasonable effort to contact the marker. If unsuccessful, the committee should accept verification of the scores for each hole by someone else who witnessed the round (e.g. the marker’s caddie or the competitor’s caddie) or, if no one else is available, by the competitor himself. Normally, a competitor who does not have proper verification of his score card is disqualified. However, in this exceptional case where actions beyond the competitor’s control resulted in the return of his score card without his marker’s signature, there is no penalty.