Shane Lowry battles back to level par at Sun City 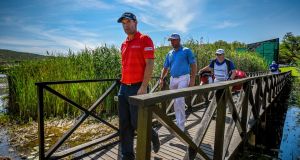 Pádraig Harrington walks on to the 17th tee during the first day of the Nedbank Golf Challenge at Sun City, South Africa. Photograph: Christiaan Kotze/EPA

A battling back nine helped Shane Lowry get back on an even keel in the first round of the Nedbank Gold Challenge in Sun City on Thursday.

The 30-year-old Offalyman was joint leader going into the final round of last week’s Turkish Airlines Open but fell away in the final round as Justin Rose claimed the title.

Lowry followed that up with a birdie on the par-five 13th but another dropped shot on the 17th saw him turn in two-over 38.

Two birdies and a bogey over the first six holes of the front nine got him back to one over before a fifth birdie of the day on the 18th – his fourth gain on the par-fives – got him back to level par for the day.

Lowry trails first-round leader Bernd Wiesberger by five shots after the Austrian fired an opening round of five-under 67 to take a one-shot lead in the $7.5 million Rolex Series event that is restricted to just 72 players and has no cut.

Wiesberger was part of a seven-strong group at the top of the leaderboard heading into the closing stages of day one, but an approach to four feet on the last saw him break out of the pack and get to five under.

Scotland’s Scott Jamieson was a shot off the lead after signing for a 68 along with France’s Victor Dubuisson, South African Branden Grace and American Julian Suri.

Englishman Graeme Storm – already a winner in South Africa this season – was then in a group at three under that also contained 2011 Masters winner Charl Schwartzel, defending champion Alex Noren and Japan’s Hideto Tanihara.

Wiesberger made the turn in level par, but three birdies in a row from the 10th catapulted him up the leaderboard. He bogeyed the 13th but picked the shot straight back up before chipping in at the 16th and making his closing gain.

“It wasn’t easy to be honest,” he told Sky Sports Golf. “It was quite breezy, quite steady direction-wise but still the course is quite tricky off the tees. You want to get a lot of fairways to be able to attack the flags and that’s quite challenging when there’s gusty winds.

“But I played all right. I’ve not had great success when I was here last time, but I approached it with a neutral mind and I played a lot better than I have the last couple of weeks and putted good. I took a couple of chances so that was nice, to get out there kind of relaxed and just let it happen.”

Jamieson had six birdies and two bogeys in his round of 68.

“It was a mixed bag, really,” he told Sky Sports Golf. “A few more good ones than bad ones. I didn’t play the par-fives particularly well until the ninth hole, our last hole. That was nice to make a birdie. You always want to be under on the par-fives here when you can reach most of them.”

Storm had a an eagle, four birdies, a bogey and a double-bogey in his round.

Fellow Englishman Tommy Fleetwood will secure the Race to Dubai title with a win this week but he stumbled to an opening 73.