Seamus Power is best of the Irish, seven shots off the leaders at the TPC at Summerlin 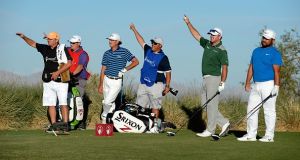 JJ Spaun watches as his playing partners, Kelly Kraft, Robert Garrigus and their caddies, signal and errant tee shot on the 18th hole during the third round of the Shriners Hospitals For Children Open at the TPC Summerlin in Las Vegas, Nevada. Photograph: Robert Laberge/Getty Images

Americans JJ Spaun and Beau Hossler will head into the final round of the Shriners Hospitals for Children Open at the top of the leaderboard on nine-under par following a mixed day of scoring.

Second round leader Spaun struggled on the front nine where he dropped shots on the first, third and fifth but the 27-year-old hit back with his first birdie on the 10th. He picked up another shot on the 13th to take a one-shot lead but gave that up on the 17th with a bogey to record a two-over-par 73.

Co-leader Hossler finished his third round as the clubhouse leader following a flawless 66 at the TPC at Summerlin with five birdies, including a fantastic 30-foot putt on the last, and was trailing Spaun throughout until his compatriot scored a bogey on the second-from-last hole.

After following up Thursday’s opening 66 with a 65, Spaun was three shots clear of his nearest challenger Kelly Kraft when play was suspended due to darkness on Friday with three holes of Kraft’s second round remaining.

And when the second round resumed early on Saturday, Kraft notched birdies at the 16th and 18th to cut Spaun’s advantage to a single stroke.

However, 29-year-old Kraft struggled to maintain his second-day efforts as he registered two double-bogeys, six bogeys and two birdies in an eight-over-par 79 to drop down to tied-18th.

Tony Finau sits three shots behind in third place, who started with a bogey on the first before he hit the turn with an eagle, and despite dropping a shot at the 11th, he picked up birdies on the 12th and 14th to register a two-under-par 69 and remain in contention.

Seamus Power remains two under par after a second consecutive round of 71, after recovering from three bogeys in his opening four holes. Fellow Irishman Graeme McDowell is a shot further adrift - a double bogey on the par-5 13th hole derailing his round of 72.